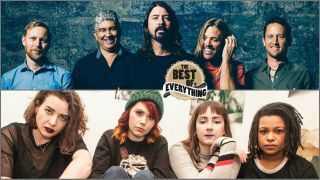 When we were asked to do a feature on a band, Foo Fighters were at the forefront of my mind. With such a varied discography and decades of music to choose from, it felt like the most sensible and best choice. Picking just 10 songs from Foo Fighters was actually really hard. I thought it would be easier, but I completely forgot just how many bloody brilliant tunes they’ve had over the years…

For All The Cows

All the songs from the Foo Fighters self-titled album released in 1995 were a bit ‘before my time’. Being just two when it was released, I didn’t really get to appreciate it until I was in my late teens/early 20s. There was just something so raw and honest about all the songs on this album, but For All The Cows was always a strong one for me. I just love the laid back ‘elevator music’ vibes in the verses, contrasting with the heavier, angrier choruses.

This song just reminds me of going swimming with my dad when I was 12, (to be fair, most Foo songs remind me of my dad, so sorry if I mention him a lot throughout this interview…) and for that reason, this song is in my top 10!

Well this one had to be on here, right? I remember seeing the Foos at Reading in 2012, and being a part of this huge, slightly inebriated crowd of people singing the ‘woahhhhh-oh-oooooh’ (you know the bit I mean, right?) with no music, and Dave Ghrol just looking out at us like a proud father. Such a big tune, and the lyrics ‘My heart is under arrest again, but I break loose, my head is giving me life or death, but I can’t choose, I swear I’ll never give in, I refuse’ – just so so powerful, such a belter!

This song just has to be on the list, reminds me of my dad because he’s the real hero here. He was the one that got me into the Foo Fighters from a young age, and whenever I hear this song I always think of him! (Cheesy I know, but true.)

‘One last thing before I quit, I never wanted anymore than I could fit into my head, I still remember every single word you said and all the shit, that somehow came along with it, still there’s one thing that comforts me, since I was always caged and now I’m free.’ Need I say any more?

Probably one of the Foo Fighters’ heavier songs, it’s such a gritty, powerful tune! It actually reminds me of the girls, it’s on one of our playlists and when we’re road tripping or driving to gigs, it always gets us head-banging! I dare you to listen to it without at least aggressively tapping your feet.

I just love the drums in this song, so fat and full of fills and personality. This song could just be Dave and Taylor and it would still be amazing! Add in the breathy sexy vocals, crazy effects on the guitars and solid riffs, and it’s just a musical eargasm.

I think a lot of people slated the Foos’ latest EP, but I loved it. It was different from their other stuff, but like most artists, the Foos have grown and changed and developed their sound. This song takes me to a calm, happy place. When I close my eyes and listen, I imagine myself sat in a window, in my pyjamas, feeling the sun beating down on my skin with a cup of coffee that’s just too hot to drink, contemplating life in a daze. Deep shit, right?

That whiny guitar at the beginning just instantly had me hooked. Plus the lyrics in this one are actually really deep, but are disguised with the upbeat melodies, and I’m a bit of a sucker for sad happy songs. ‘I’m the generator, firing whenever you quit’ – it’s all about making sacrifices for other people, and being the rock that they need you to be.

I love this song so much, this is such a beautiful song. The build is just done so perfectly it gives me shivers. It starts out slow and stripped back, and slowly builds into the full band, with more vocals, the vocals become more aggressive and passionate, the drums get heavier. This is a great one to sing at yourself in the mirror, I find…

The Nyx is out now via Rumours Music. Check out the video to their track Hideaway below.