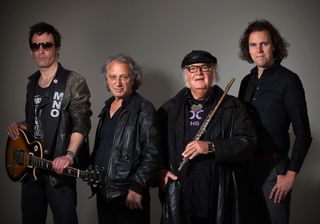 Dutch prog legends Focus have announced a new album, 11, which will be released in January. However the new album will be available on the band's November UK tour dates.

When asked about the album, Thijs van Leer responded poetically:

"Wow, my joy could not increase
To see this new release
It has Mazzel, Palindrome and Heaven
Plus a title track called Eleven
Both angelic and a beast
It’s Focus, to say the least!"

The 11 track album will be released as a CD, gatefold coloured LP and Download on the band’s own In And Out of Focus Records, via Cherry Red, in late January. The album features artwork by Roger Dean.

For fans who can’t attend the November tour, the only place where the CD can be ordered online (with orders being fulfilled in November 2018) is the band’s own webstore.  For fans wishing to pre-order the CD and LP for when they are released in January, Amazon is starting to take pre-orders now for CD and for album.