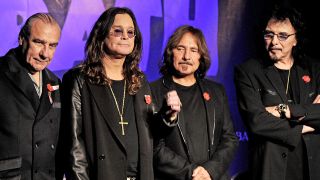 Former Black Sabbath drummer Bill Ward has ruled out a return to the band for the last dates of their farewell tour, despite renewed speculation in recent days.

The icons’ The End journey will be completed in their home city of Birmingham in February, three and a half years after final studio album 13 was released.

Ward was originally to appear on the record but bowed out in 2012, saying he hadn’t been offered a contract he regarded as “signable.” That led to a war of words, with the strongest exchanges between Ward and frontman Ozzy Osbourne.

In a Facebook statement, Ward says via a representative: “We have seen it reported in the news that Bill will be playing with Black Sabbath on The End tour in the UK.

“This is incorrect, and we wanted to make sure you heard it from us directly. Bill is not playing with Black Sabbath in the UK, or on any other dates of The End tour.”

Last year Ozzy said the band had doubted whether Ward was physically capable of recording or touring, leading the drummer to say there could be no chance of reconciliation without a detailed apology for “insults and false remarks.”

In January, bassist Geezer Butler said Ward had been invited to take part in the final shows but he’d refused. Ward countered by saying he’d asked about involvement and been told “there was no interest.” Butler later apologised.

Black Sabbath hired Rage Against The Machine drummer Brad Wilk for 13, with Tommy Clufetos joining them on the road. Ward released solo album Accountable Beasts in 2015, and earlier this year unveiled new band Day Of Errors.