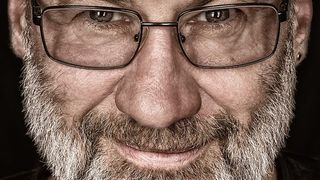 Fish has been reunited with the original copy of the poem that inspired Marillion’s iconic Jester character, decades after it was lost.

The singer wrote the poem, titled The Allotment, on the back of a copy of Genesis’ Duke album in March 1980 and gave it to a friend, who he subsequently lost contact with.

But a fan recently discovered the album with the poem written on it in a charity shop and returned it to the former Marillion frontman. You can see the poem on the cover below.

“It was completely out of the blue,” Fish tells Prog. “Somebody brought it in a Salvation Army charity shop in Stirling. He saw there was a hand-written poem on the back, signed by Derek Dick. He went, ‘Derek Dick? That’s Fish.’

"They sent me a scan of the poem and I read it went, ‘Oh god, remember that.’ There was even a sticky bit of paper inside that proved I bought it from Woolworths in Galashiels in March 1980.”

The Allotment begins with the lines, ‘Snowdrop unfurls/Virgin glory, resplendent/Among brambles of anguish with their thorns of sorrow.’

But it's significant because it features the very first mention of the Jester character that would become emblematic of the frontman’s lyrics during his time with Marillion.

The poem reads: ‘Will I savour the flower of fulfillment, or/Will I remain another crying jester caught forever, in these brambles of malice.’

“It’s the first ever time I wrote the crying jester of Script For A Jester’s Tear down on paper,” says Fish. “The Jester was inspired by the death of Keith Moon. I used to work the petrol pumps at my dad’s garage, and I remember writing a poem about Keith Moon, something about even jesters crying – only a two-stanza thing. But that image must have stuck in my mind.

“I was in my final year as a Forestry worker at the time when I wrote The Allotment. It was about two months before I sang at my first gig, and months before I headed down to Aylesbury to eventually join Marillion in 1981.

Fish wrote the poem for a woman named Jo, who was a flatmate of his girlfriend at the time.

“Jo and I got on really well,” he says. “She said, ‘I really like your words, you write really well.’ And I wrote this thing on the back of the Duke album for her.

“I tracked Jo down via her husband on Facebook, and he told me what happened was that they’d downsized their house after their kids moved out. The albums had all gone to the kids, and they had taken them to the Salvation Army charity shop.

“It was kind of emotional getting it back. It’s the only piece of writing that I have from that time – at that age you bounce from flat to flat, bedsit to bedsit, and you lose things. But it’s pretty incredible, because the Jester thing is so significant.”

Fish will be revisting the early years of his career on his forthcoming UK tour, which begins on March 13 in Aberdeen.

As will as playing his debut solo album Vigil In A Wilderness Of Mirrors in full, the singer will be playing a handful of tracks from Marillion’s debut album, Script For A Jester’s Tear.

“I look back on that album fondness, though I do go, ‘How the hell did I sing that high?’” he says. “It was a fresh voice. It hadn’t been polluted by Benson & Hedges and Jack Daniel’s.”

The tour will also see Fish previewing tracks from his long-anticipated new album Weltschmerz, including the 16-minute The Rose Of Damascus.

"Weltschmerz roughly translates as ‘the pain of the world’, and I wanted to write about people living in the world today,” he says. “Every song is about somebody’s approach to life, how they deal with the challenges they face. I’ve been affected over the years. I’ve gone through some pretty dark times.”

Ironically, says Fish, there are parallels between Weltschmerz and his recently-rediscovered poem The Allotment.

“The really weird thing is that the lyrics to all the songs apart from one mention a flower or a plant,” he says. “When my father died in 2016, I found gardening was a great therapy. I lost myself in it for six or seven months. One of the titles I was thinking about for Weltschmerz was actually The Allotment, before anyone got in touch with me about the Duke album. It was pure subconciousness.”

Fish’s UK tour begins on March 13 in Aberdeen. Weltschmerz is released in July.