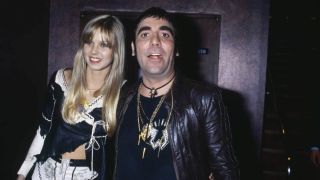 The real Keith Moon was a son, a brother, a father and an insecure man. The public Keith Moon was The Who’s manic drummer and hellraising, daredevil comedian; a man who only ever lived in the moment. And it was this version of Keith Moon that led to his untimely death on September 7 1978.

A month earlier, The Who released Who Are You, their first new album in three years. But Keith’s drinking and drug taking had impacted on his performance and his appearance. Moon’s playing was erratic and unreliable, and he was made to pose Christine Keeler-style for the cover photograph so as to conceal a paunch. Keith’s condition meant The Who were in no state to tour, which left him anxious and depressed.

Moon had been taking Heminevrin for some time. It was a powerful sedative prescribed to him by Harley Street physician, Dr Geoffrey Dymond. Heminevrin quelled the craving for alcohol, but sometimes left users in a docile and forgetful state. But it worked. In the days leading up to his death, Moon cut back on the booze.

On September 6 Paul McCartney threw a party at the Covent Garden diner Peppermint Park to celebrate what would have been Buddy Holly’s 42nd birthday. McCartney had acquired the rights to Holly’s song publishing, and a biopic, The Buddy Holly Story, was premiering later that night.

Moon initially told his girlfriend Annette Walter-Lax he didn’t want to go to the party. When she told him she wanted to go anyway, he changed his mind and called his dealer who delivered some cocaine.

The couple arrived at Peppermint Park, where Annette has since insisted Moon didn’t drink or, if he did, limited himself to just two drinks. While he was still using cocaine, the fact that he didn’t go wild on the free champagne was considered progress.

Other party guests, including Paul and Linda McCartney, David Frost and ex-Faces drummer Kenney Jones (whom unbeknown to everyone would take Moon’s place in The Who) all remember Keith being in good spirits and surprisingly sober.

Others, including Led Zeppelin’s former tour manager Richard Cole, remember Moon telling them he planned to wed Annette. Cole: “He said ‘I feel great, I’ve given up everything… except women’. And I’m gonna get married again.”

The proposal never happened. After the party, Moon and Annette attended the midnight premiere of The Buddy Holly Story at the Odeon, Leicester Square. Outside the cinema Keith spotted Melody Maker journalist Roy Carr and grabbed him in a bear hug.

“He hugged me for about two or three minutes,” said Carr, who noticed Keith was crying when he pulled away. “I said, ‘What’s wrong?’ He said, ‘No, no, you suddenly realise who your friends are…’” Moon didn’t elaborate, and Carr later admitted the drummer looked, “shagged out… and like a caricature of himself.”

Inside the cinema, Keith seemed agitated and insisted they leave an hour into the movie. “He was restless,” said Annette. “He said, ‘I don’t want to sit through this. Let’s go.’”

Back at their flat, in 12 Curzon Place, Mayfair, Moon told Annette he was hungry. She cooked his favourite, lamb cutlets, after which they went to bed to watch a video of the camp horror film The Abominable Doctor Phibes.

Talking to Moon’s biographer Tony Fletcher, Annette remembered Keith “taking his usual glass of water and bucket of pills” before falling asleep around 4:am. Keith had been exceeding his prescribed dose of Heminevrin the same way he abused every other drug. But Annette hadn’t realised quite how many pills he was taking.

In Annette’s account, Moon woke up at 7:30am and told her he wanted food. He was in a bad mood and they argued, but Annette cooked him some more lamb. After clearing the plate, Moon took more Heminevrin and fell asleep again. But his snoring meant Annette retreated to the sofa, where she slept until 3:40pm.

After waking up, she ventured back into the bedroom, where she found Moon lying on his stomach with his left arm hanging over the side of the bed: “I couldn’t hear him breathing. Right there and then I knew something was wrong. I went into a panic.”

Annette rang Dr Dymond, who called an ambulance. But it was too late. Moon had been dead for some time, but was officially pronounced dead at 5:50pm at Middlesex Hospital.

Guitarist Pete Townshend was the first Who member to be told the news by the group’s co-manager Jackie Curbishley. Townshend called vocalist Roger Daltrey and then bassist John Entwistle, who was being interviewed at the time.

Not a man prone to public displays of emotion, Entwistle continued with the interview until asked when The Who plans for the future. Moon’s closest friend in the group then broke down in tears.

The official cause of death was listed on the certificate as “Clomethiazole (Heminevrin) overdose, self-administered but no evidence of intention. Open verdict.” It was later revealed Moon had 26 undissolved Heminevrin tablets still in his stomach when he died.

For many close to Keith, his death came as more of a shock because they knew he’d cut back on the excessive behaviour. He was, they insist, trying to get better.

What nobody knew was the damaging effects of the prescription drugs he was taking and in such quantities. At Moon’s funeral Daltrey told the mourners he still half-expected Keith to leap from the coffin, claiming it was all a joke.

Sadly it wasn’t. Rock’s greatest drummer was just 32 years old when he died.

Mark Blake is the author of Pretend You’re In A War: The Who and the Sixties.

What's it like to grow up with Keith Moon for a dad?