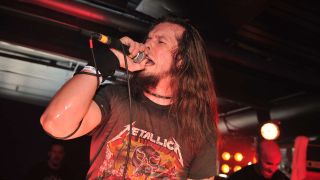 Nelson, who fronted the thrash icons from 2007 to 2009, was accused of punching James Paolino, 75, and Philip Falcone, 74, in an elevator at the Aloft New York LaGuardia Airport hotel in Queens on August 30, 2019.

The fracas reportedly happened after the two men accused him of being drunk while performing a gig at the hotel.

"You had a rough night,” Paolino was said to have told Nelson in the hotel elevator after the show.

Paolino told the Daily News that the comment prompted Nelson to “start kicking me and punching me in the head. These were real MMA kicks. He knocked me down. I'm on the floor bleeding. He broke my glasses and I knew the next kicks were coming for my head. I'm helpless."

Falcone claims that Nelson turned on him after he tried to calm the singer down.

"One of the elderly gentlemen said something which caused [Nelson] to become enraged and he subsequently punched them," the police told the Daily News.

Nelson pleaded guilty to charges of one count of second degree assault for injuring a victim aged 65 or older and one count of assault of recklessly causing physical injury. He is due to be sentenced on April 3.