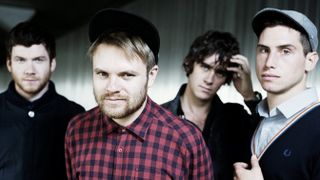 Enter Shikari have announced that they’ll shortly start work on what will be their fifth studio album.

The UK outfit released The Mindsweep in 2015 and followed that with the single Redshift earlier this year. Now they’ll begin pulling ideas together for new material this week.

Mainman Rou Reynolds says: “Thank you everyone who bought The Mindsweep, came out to a show, bought merch, stuck up for us in an online or offline brawl, believed in the music, believed in the lyrics, made the album their own and used it to help make memories. Big love to you.

“But now my friends, The Mindsweep era has come to an end. Now I start the long process of writing what will be our best album ever. Let the hibernation, the inception, the formulation, begin.”

Enter Shikari will release Live At Alexandra Palace on November 4. It will be the sixth instalment of the UK outfit’s Bootleg Series – showcasing their sold-out performance in February at the London venue.

Earlier this year, Enter Shikari released their Mindsweep Tour documentary which followed the band on their arena tour in support of the follow-up to 2012’s A Flash Flood Of Colour.