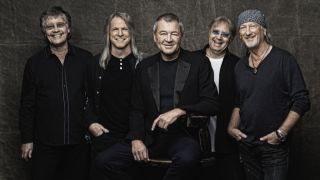 Deep Purple have announced rescheduled dates for two shows in Sweden that were postponed when drummer Ian Paice suffered a mini-stroke.

The June 14 gig in Stockholm and the following night’s show in Gothenburg were pulled as Paice was being treated in a Stockholm hospital after a TIA (Transient Ischaemic Attack).

The Gothenburg show now goes ahead at the Liseberg venue on July 1 and the Stockholm gig will take place at Grona Lund on July 2.

Announcing the postponements, Paice vowed to be back to work by next month. He said: “These are the first shows I have missed with Deep Purple since its formation in 1968. Thanks to all the people who have shown concern and sent their best wishes.

“My dexterity in the hand is coming back quickly and I fully expect to recommence touring next month. So now I have a set of tablets which have to be taken every day to ensure it doesn’t happen again.”

Meanwhile, Deep Purple have also released a video showing them on tour in Belgium in 1973. It can be viewed below. The band were inducted into the Rock And Roll Hall Of Fame this year. They’re working on their 20th album.

Deep Purple Gillan has 'no respect' for Rock Hall