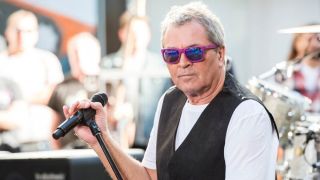 The singer’s scathing attack comes as the band are nominated for inclusion for a third time, having lost out in both 2013 and 2014.

Purple have been eligible for more than 20 years and were also recently named top of the list in a public poll of acts that should be admitted to the Rock Hall.

Gillan tells Classic Rock: “I have no respect for them. They’re the kind of people that having seen A Hard Day’s Night decided that The Monkees would be America’s equivalent to the Beatles. They’ve no idea what goes on in the big, wide world outside of their self-arbitrating surroundings.

“To me, those people are bloody arrogant and rude. I’ve heard that somebody on their committee dismissed us as one-hit wonders. I couldn’t figure out whether that hit was Hush, Kentucky Woman, Black Night, Strange Kind Of Woman, Child In Time, Perfect Strangers, Knocking At Your Back Door or perhaps even Smoke On The Water.

“I’m very grateful for the other bands and artists that stood up for us with a view to our induction – that’s nice of them. But I wish that the Hall Of Fame had had the discretion to ask us first. It’s now become a debate in which we are too late to have the final word.”

Gillan adds he had no idea they’d been nominated again and only found out when Classic Rock spoke to him.

He says: “I’m sure that my mum would have been pleased and it all sounds very grand, but just take a look at who’s in it. I once wrote a song called No Laughing In Heaven which was about not wanting to go to heaven due to the company I’d be keeping, and with a few exceptions, the Hall Of Fame is pretty much the same thing.”

Bandmate Roger Glover last year said the band might knock back their induction, should it ever happen. Asked if he feels the same way, Gillan says: “I haven’t even given it that much thought. It wouldn’t change our lives one way or the other. That probably sounds petty but it’s not meant to. It’s just an annoyance to be honest.”

Should Purple get the nod, it would open up a can of worms – including which of the band’s many members should be inducted, and also whether or not to perform live at the ceremony, which takes place in New York next April.

Guitarist Steve Morse recently revealed that Purple are set to begin recording their 20th album in late January. Gillan says: “We’ve got some really good song ideas and we’re in good shape for the process.”

The band won’t rule out the idea of previewing some new material at their one-off UK date at London’s O2 Arena on December 3. Gillan adds: “You might well hear some of the new stuff at the O2. We’re probably going to try out a new idea or two on the night.”

Tickets for the O2 Arena show are priced £50 and £54 (subject to per-ticket charge plus order processing fee) and available from LiveNation or Ticketmaster.