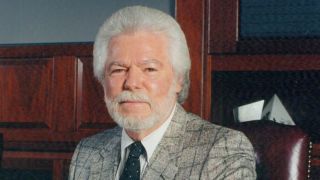 ZZ Top have paid an emotional tribute to their former manager Bill Ham, who died last week at the age of 79.

In an interview for Classic Rock, Billy Gibbons, Dusty Hill and Frank Beard recall Ham’s hard work and dedication from the early days of their career through to their international breakthrough and all three say they wouldn’t be where they are today without his input.

Ham worked with the band for 37 years and also produced many of their hit records. His death was confirmed by The Travis County Medical Examiner Office on June 21.

Guitarist Gibbons describes Ham as the “fourth member” of ZZ Top. He tells Classic Rock: “A thing to have really been overlooked about Bill was that he was a great and gifted songwriter in his own right. You know, he had a bunch of hits as both writer and performer from way back in the 50s.

“And he generously and willingly shared those techniques with us from the very beginning of his involvement in our band. So that was a very solid platform that he bought to the ZZ Top party.

“All the time that Bill was with us, he was incredibly supportive. He used to say to me when I was working on a song or we were doing an album, ‘You just keep going and I’ll let you know when something moves me.’ I doubt very much if we’d have had the career we’ve had without Bill being on board with us.

“I certainly always considered him the band’s fourth member and our shining light. I mean to say, he managed to put up with the trials of dealing with three renegade individuals for more than 40 years, so that’s something in itself.”

Bassist Dusty Hill adds that Ham’s skills as a producer were often behind moments of magic in the studio and he says that despite his enormous talent as both a manager and producer, Ham was deeply private and shunned the limelight.

Hill says: “Bill wasn’t just our manager. The four of us came up together and we were very close.

“Bill was directly responsible for a lot of the good things that we did or got to do. One thing in particular I remember was when we had recorded the songs Waitin’ For The Bus and Jesus Just Left Chicago for the Tres Hombres record.

“There was that bump in the studio that merged them together as one song, which was actually a total accident – they were meant to be separate songs. But Bill was the one who caught that and suggested we leave it be, and that was absolutely the right decision. Bill was very good at making that kind of intervention.

“He was also a very private man. Even getting Bill to have his photograph taken would take a real effort. For all that he accomplished, he didn’t want to step into the limelight.”

Ham formed his Lone Wolf management company in 1969 to help make the most of ZZ Top’s talents after spending the early days of the band’s journey driving them from show to show in his car.

Drummer Frank Beard says: “When I think back on Bill now, it’s those very early days that the four of us were together that stand out for me. Bill would drive us from gig to gig in his car, all over the state and further afield, sharing his stories with us.

“I truly think the band would have broken within three years if Bill hadn’t been involved. He was the guy that smoothed things out whenever we got our feathers ruffled with each other and who always encouraged us no matter what.

“He was our father figure, simple as that.”