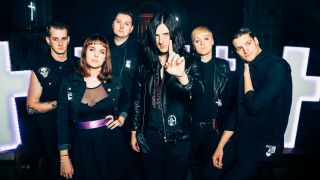 Creeper have announced their biggest UK and European tour to date.

The Southampton horror punks will promote their forthcoming debut album Eternity, In Your Arms on the 2017 spring trek. The album is due on March 24. The band promise fans an “immersive and theatrical stage show.”

Vocalist Will Gould says: “These shows are a significant moment in the history of Creeper. Not only are they the first time you’ll hear the new songs from Eternity, In Your Arms live, but they are the biggest headline shows we’ve ever played. They will also be the first to have a full, ambitious production to equal the ambitious character of our debut record.”

He continues: “After two years of touring mainly as a support band, we understand the importance and significance of our support acts on this tour too. We are lucky enough to have the most amazing package to compliment this adventure.

“I’m still pinching myself at the full line-up we have for this tour. It is very representative of the shifting climate in music right now, and we’re very excited to be representing that new wave.

“We couldn’t be more excited about this tour. So please, see this as an invitation to come and step into the world of our records, and an invitation to be a big part of the history of this band at our biggest shows to date.”

Support acts on the tour will be revealed in due course. Tickets go on sale on TicketWeb from December 9.

Five things I can't live without: Creeper's Will Gould