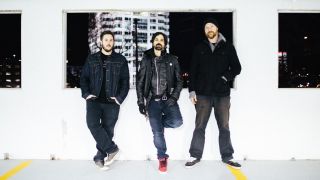 CKY have announced a UK tour for later this year.

They made the surprise announcement on Facebook, releasing a poster featuring all 12 dates.

They’ll kick off the run of shows at Brighton’s Concorde 2 on May 8 and wrap up with a performance at London’s Underworld on May 21.

CKY have released four studio albums – their last being 2009’s Carver City, which was recorded with former vocalist and co-founding member Deron Miller.

The lineup currently consists of Jess Margera, Chad I Ginsburg and Matt Deis.

CKY are working on what will be their fifth album. Last year, the band posted several pictures from the studio on Facebook – and the trio will premiere several of the new tracks on the UK tour.

A statement reads: “Fans can expect new music and more tour dates from a band that is re-energised and refreshed, and emerging with a career-defining effort that will prove to be worth the wait.”

Tickets for the UK shows will go on sale from February 24 (Friday).