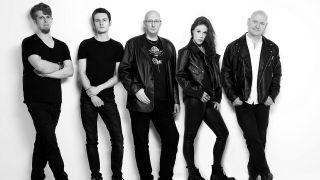 British melodic prog rockers Cairo have premiered the video for their brand new single Deja Vu with Prog. The single is taken from the band's new live album, Alive In Holland, which will be released through Heavy Right Foot Records on January 24. You can watch the video in full below.

The album was recorded at a show performed at The Parkvilla Theatre, Alphen aan den Rijn, Holland in October last year, and was mixed and produced by John Mitchell and Rob Cottingham.

"After something of a gigging lull for various reasons in 2019, albeit the second studio album has been written in that time, we are delighted to be back with a vengeance and to be releasing our new single," Rob Cottingham told Prog.

"The gig in Holland was Sarah Bayley’s debut gig, and her first UK gig will be the album launch gig in Milton Keynes, so do get along to see her. Not only are we launching the Alive In Holland album that night but we also have brand new merchandise; new music, and special guests The Paradox Twin."

Cairo will play The Craufurd Arms, Milton Keynes, supported by The Paradox Twin on January 24. Tickets for the show are available here.