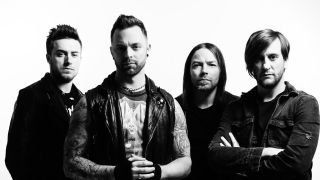 Bullet For My Valentine will play 22 dates across North America next year with Asking Alexandria, they’ve confirmed.

More acts are to be announced for what’s being called the British Invasion Tour, which kicks off in February.

BFMV released fifth album Venom last month – their first without bassist Jay James, who quit the band in February to be replaced by Jamie Mathias. They’ll begin a UK and Ireland tour later this month.

Asking Alexandria recruited former Make Me Famous frontman Denis Stoff in May following the departure of Danny Worsnop in January. They’re currently working on the follow-up to 2013’s From Death To Destiny and feature in the latest edition of Metal Hammer, out now in print, digital and via TeamRock +.