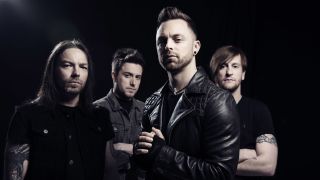 Bullet For My Valentine frontman Matthew Tuck says the band fought hard to avoid splitting with Jay James – but in the end it was for the bassist’s own good.

The Welsh outfit announced his departure in February during the recording of their forthcoming fifth album Venom and later named Jamie Mathias as their latest member.

Tuck tells Revolver: “We parted ways with him a long time before we announced it. We wanted to make sure we were comfortable making that decision, and comfortable with making that statement publicly.”

He says the band were “going through emotional distress” behind the scenes but adds: “We were writing good songs. It probably helped having that distress to bring out that feistiness that the last album lacked.”

He continues: “I’m not going to go into detail – but it was in Jay’s best interest personally, more than ours, that he was not in the band. Stuff was jeopardising the band’s career and it had to stop. We just had to make that call.”

He describes dismissing James as “the most difficult thing we’ve ever had to do, not just in the band but in our lives.” He continues: “It was awful. Losing a long-term member, and our best friend, was a very powerful moment that we’d never been through before.

“It was a decision that we deliberated over for, like, three months. We kept fighting and fighting to find valid reasons for him to stay – but eventually it was just impossible.”

Venom is released on August 14 and the band have already revealed the tracks No Way Out, You Want A Battle? (Here’s A War) and Army Of Noise. They tour North America with Slipknot and Lamb Of God starting this month and return to the UK in September.