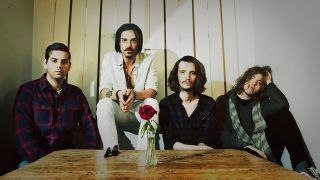 Blurred Vision have announced a London show at Jack Solomon's in Soho on November 14. It will be the first time the band's new-look line-up has performed live.

“My brother Sohl decided the time was right to retire from live music," explains Osley. "He’s hung up his bass and, it goes without saying, will be sorely missed. His vision, wisdom and talent have left an indelible mark on the music he helped create. And as drummer Ben Riley goes on hiatus, his presence and unparalleled playing will carry on in the music he helped shape over the last eight years. I look forward to sharing the stage with him again in the future.”

Tickets for the Jack Solomon's show are priced at £8 in advance, £10 on the door. Tickets are available from the band's website.