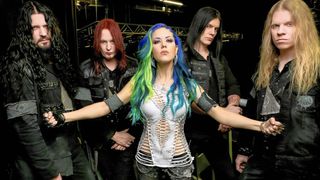 Arch Enemy, Chelsea Grin and Oni are the latest names to be added to this year’s Bloodstock bill.

Arch Enemy, who will play on the Sunday, confirmed earlier this week that work was well underway on the follow-up to 2014’s War Eternal.

Guitarist Michael Amott told Rock Hard: “The new album is written. It’s partially recorded. There’s a lot of stuff left to do – all the guitars and vocals and bass.”

Chelsea Grin are set to perform on the main stage on the Friday – and frontman Alex Koehler reports that they’re excited at the prospect of playing the festival.

He says: “We are looking forward to heading back overseas this summer to be part of Bloodstock 2017.

“When we were offered the show and we saw the lineup we were extremely excited. We’ve seen tons of videos from Bloodstock in the past and cannot wait to be there.”

Canadian outfit Oni, meanwhile, will play on the Sophie Lancaster stage on the Saturday.

Vocalist Jake Oni says: “In the past year, we’ve had the pleasure of playing the UK a few times, but being a part Bloodstock 2017 is a huge honour.

“We are not only excited to show this festival what we’ve got, but also to see some of the masters that are playing. You don’t want to miss this!”

Tickets for the weekend are available via the Bloodstock website.