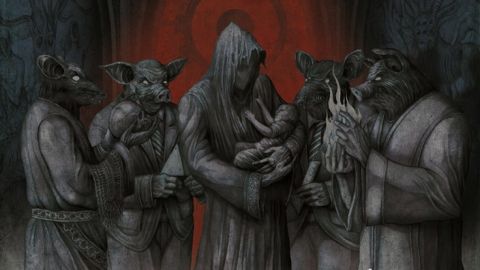 There was already a huge sense of anticipation surrounding Arch Enemy’s first album in three years when, on the eve of its release, the departure of iron-lunged vocalist Angela Gossow sent a seismic shock through the metal world. Since she announced herself on 2001’s Wages Of Sin, Angela has become one of the most recognisable faces in metal, spearheading a revolution in female vocalists and also helping to break down boundaries in extreme metal bands in particular. Being such a unique focal point of the band arguably helped Arch Enemy’s rise as much as the thundering melodic death metal provided by the Amott brothers on genre landmarks Anthems Of Rebellion and Doomsday Machine.

So to hear that Angela was to be stepping aside to manage the band, and being replaced by Alissa White-Gluz of Canadian metallers The Agonist – a band who like many others follow the Swedish melo-death style but are also heavily reliant on cleanly sung vocals – understandably sent alarm bells ringing among many of Arch Enemy’s loyal devotees. With this also being the first album without his brother Christopher (who’s been replaced by Nick Cordle), a lot now rests on the shoulders of Michael Amott to prove it has been his legendary riffs and unmistakable style that were the main reason for Arch Enemy’s success.

As it transpired, anyone who heard War Eternal’s title track, released just hours after Angela’s departure was announced, immediately realised that any worries were completely unfounded. Alissa fits perfectly into her predecessor’s substantial shoes, with her raspy but clear vocals sounding fresh and vital at the forefront of Michael’s trademark riffs and a stunning twin-lead harmony. It sets the stall out perfectly for the front half of the album that doesn’t differ radically from the winning blueprint the band have melded over their near-two-decade reign.

The choral intro giving way to blastbeats and galloping rhythms of Never Forgive, Never Forget, the chugging stomp of As The Pages Burn and flamboyant leads and skull-crushing riffage of No More Regrets – all backed by the vastly underrated punctuation of Daniel Erlandsson drumming.

The simple melodic refrain of You Will Know My Name shows Michael’s ear for a mammoth hook at its best, but also the subtle use of orchestral strings brings an unexpected but welcome grandeur to proceedings. It’s a similar trick used to a much greater extent on the towering Avalanche and operatic splendour of Time Is Black that shifts from one spinetingling passage to the next, and choruses just stopping short of utilising Alissa’s clean vocals.

It’s arguably the most exciting moment of the band’s career to date, setting up the second half of the album that’s packed with the call-to-arms march and light-speed flourishes of On And On and Down To Nothing’s sinister thrash assault. War Eternal marks a new dawn for Arch Enemy, but it heralds a future that both the band and fans can look forward to. It’s an album that stands proudly alongside previous achievements, is both familiar and daring, but also, importantly, heavy as hell.