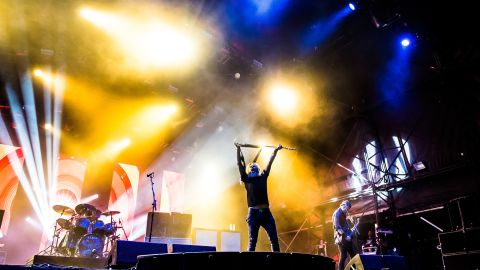 There’s something hugely endearing about the obvious passion that post-metal Londoners Sumer put into their Bloodstock performance. Their music may occasionally drift into overly familiar waters – it’s possible to like Tool a bit too much – but the quintet’s collective chemistry is such that everything they play feels underpinned by some mystical force. Much of the Bloodstock bill sticks rigidly to heavy metal tradition, but Sumer’s densely atmospheric barrage of sound deservedly draws a huge crowd, and more than a few minds are being robustly blown.

It can’t be too long before Brutai are rocketing up the greasy showbiz pole. More succinct and elegantly melodic than the vast majority of their post-djent peers, they take Bloodstock by surprise by being neither too cerebral nor too polished for the sea of beards and tattoos before them. In fact, at times they’re crucifyingly heavy, but Felix Lawrie’s bell-clear croon and Alex Lorimer’s swathes of ingenious electronics provide an anchor that’s planted firmly in more forward-thinking realms.

It’s hard to deny that France’s Gojira are the most imaginative band to grace Bloodstock’s Ronnie James Dio Stage this year, and while they’re indubitably too extreme and intense for the average Asia fan, their progressive credentials are becoming ever more apparent. As they clatter through the amorphous, punishing likes of set centerpiece Flying Whales and what looks like the weekend’s biggest crowd goes berserk, the exchange of energy between band and audience is irresistible.

As a result, Mastodon face the very real prospect of looking second best, despite their headlining status. In the end, the bearded wonders tear through Tread Lightly, The Motherload, Iron Tusk and the rest of their set with barely a pause for breath, everything sounding muscular and vital, if not necessarily as relentlessly absorbing as Gojira’s earlier set.

Where prog and metal collide, Voivod fans lurk, and it’s that gallant band of weirdos that turn up in their droves to see Vektor on Sunday. While manifestly too fast and furious for most prog diehards, the Arizona quartet’s songs offer a wildly progressive and hallucinatory version of thrash metal that definitely warrants further inspection.

Meanwhile, Symphony X are giving a prog metal masterclass on the Ronnie James Dio Stage. Focusing primarily on songs from latest album Underworld, Michael Romeo’s crew sound colossal and imperious. Russell Allen is in fine voice, particularly on a vicious Serpent’s Kiss, and thanks to the band’s shrewd decision to value complexity and brute force, there’s barely a fist left unraised as they conclude with the almighty Set The World On Fire. Let’s chalk this up as a victory for the progressively inclined.