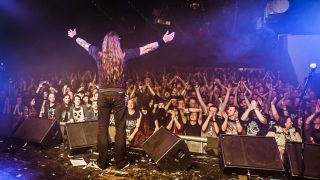 It isn’t often that we run a news story about ourselves, but this issue, of all issues, it only seems right. And this story is really about you and the wider community we’re all a part of and love. If you consume your rock news only by way of this magazine, there’s also a good chance that, other than being a little miffed that your copy of CR went on sale a little late this month and last (sorry!), you’ve been unaware of all the drama – and, more importantly, the innate, old-fashioned goodness of the rock world – that went on behind the scenes at Classic Rock and our sister titles Prog and Metal Hammer in December. This is what happened…

At around 4pm, the staff members are informed that TeamRock (who owned the magazine) has gone into liquidation. Forty-six people in London and twenty-seven in Scotland are affected. These journalists, designers, publishers and back-up teams no longer have jobs, and they will not be paid for the month of December, nor receive severance money. There are tears and group hugs, and the local pubs do brisk business.

Orange Goblin singer Ben Ward and his partner Sandie start a JustGiving page, stating: “These are good, hard-working, committed people who, through Metal Hammer, Classic Rock, Prog Rock, TeamRock Radio and more, have supported the rock and heavy metal scene in this country for decades, and now we, the rock community, need to pull together to help give something back.” Over the following weeks, an incredible 3,698 people do just that. And the incredible comments (including the very fitting one that headlines this story) that they leave make for emotional reading.

Aware of the importance of continuity for a potential buyer, a small team are re-employed by the administrators, charged with getting what could be the final issues of Classic Rock, Metal Hammer and Prog on the shelves. In a touching display of rock solidarity, the current team of Kerrang! mag invite TeamRock’s ex-employees to its Christmas party. Classy.

Queen re-Tweet the news of TeamRock’s plight to their 1.1 million followers. Rush say: “We are thinking of the very talented and passionate staff that lived to bring the music of so many artists to their fans.” Ben Ward’s JustGiving fund, now at £66,000, reaches the pages of the London Evening Standard.

The final day for submission of bids to buy the magazines. Everybody is told: “Don’t expect to hear news of any substance until the new year.”

In what’s described as a ‘wake/coffee morning’, ex-employees are allowed back into the old offices one final time before they are closed down for good, to say their goodbyes and retrieve any remaining belongings.

Confusingly, the ‘final’ issues of Classic Rock, Hammer and Prog begin to be seen in newsagents up and down the country. In the evening, Orange Goblin and Steak play a fundraising gig at the Black Heart in London’s Camden, throwing a further £2,692 into the JG pot.

Future plc (the magazines’ former home!) steps in to buy out the titles. A statement reads: “We have started picking up the pieces and are hoping to get the show back on the road as soon as possible.”

The Guardian breaks the news: “Future Publishing buys the magazines, websites and events including 30-year-old Metal Hammer for £800,000” – a very good bit of business for Future, who had sold Classic Rock and Metal Hammer and Prog to TeamRock for over £10 million in 2013.

Work commences on the new issues of Classic Rock, Metal Hammer and Prog.

And now you hold one of those issues in your hand. So, we’re back. And at your service. And beyond grateful for everything the rock family have done for us over the past two months. Thank you.

For those who rock, and who have always rocked, we salute you!

A Word With Ben Ward

The Orange Goblin man who started the JustGiving fund on the power, togetherness and generosity of the rock community to which we all belong.

Where were you, and what was your instant reaction when you heard about TeamRock going into administration and the magazines closing?

I was still in bed in the afternoon, nursing a massive hangover as Orange Goblin had played at Koko the night before. Scrolling through Facebook, I noticed various postings and at first I thought it was some kind of joke. Then I saw that the company had gone into liquidation and the severity of the situation dawned on me.

You’re good friends with a few of the staff. Their stories of that fateful afternoon must really have hit home?

They really did. There are people that have supported me and Orange Goblin for the best part of twenty years, and friends that I socialise with on a regular basis. I knew a few of the people via the Heavy Metal Truants, as I have ridden to Donington with them on charity rides. It was horrific to think this had happened just six days before Christmas.

Together you and your girlfriend Sandie set up the JustGiving page. Why?

The page was actually Sandie’s idea. We honestly didn’t think many people would notice, so we just kept sharing it on Facebook, and within minutes it was being shared by all our friends and contacts too. Word of it really did spread like wildfire.

It was incredible! We honestly thought that £20,000 was far too optimistic. But, as you say, that was smashed within hours. And as well as the money rolling in, reading everyone’s comments quickly made us realise just how much the rock and metal community loved and would miss the likes of Metal Hammer, Prog and Classic Rock. The outpouring of affection and appreciation for the staff there was both incredible and very well deserved. As it went through £20,000, we set the target to £50,000, and then £75,000, and it just kept rising. There were some amazingly generous contributions, but I would like to thank everyone who donated. No matter how little or how much, it all counted.

How did you feel when the likes of Queen and Rush came on board?

That was just surreal. Being name-checked on the official Rush page was crazy! I got a lot of credit for what happened, but it really was a group effort of me, Sandie, Tom Brumpton, Lulu Davis, Lisa Fox and a few others that helped spread the word and never gave up pushing it. They were relentless and ensured that the whole thing was never far from the public eye. We had press in the Guardian, the Evening Standard, were on BBC Five Live, ITV and more.

On top of everything, Orange Goblin and the equally generous Steak played a benefit gig for us all too.

As soon as I mentioned it to the band they all jumped on board, and along with Josh at Old Empire and the generous folks at the Black Heart it was all sorted in no time and with minimum fuss. It was great to get Steak involved too, as Reece from the band is the man behind Desertfest, a London festival that has received incredible support from everyone at TeamRock too, so they didn’t take much persuading either.

It blows me away to think that we raised that much money in a month.

What can we read into this regarding the unity of the rock scene?

We’ve seen it before, but this campaign just reiterates that there’s no one better than the rock and metal community for pulling together and helping each other out. We all need what the staff at TeamRock provided, whether that’s the printed press, the online press, the radio stations or anything else. Rock and metal is always undermined by the rest of our so-called ‘society’, so it’s great to see everyone group together and fight back when things like this happen.