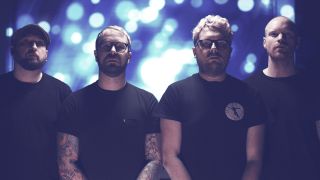 Rising British post rockers Blanket will perform the soundtrack to their short film Fragments Of A Dream live via Prog's Facebook page tomorrow at 1pm.

“This short film provides a cinematic look at, and explanation of, the historical social romanticism of the seaside town, interlaced with and preceded by the stark comparison of its underlying social issues and images of decay and degradation,"the band told Prog. "Narrated by Robert Foulds, directed by front man Bobby Pook and sound-tracked by the band, the filmed features excerpts and tracks from our forthcoming debut full length album How To Let Go.

“Fragments Of A Dream attempts to show the reality of a once thriving seaside town, now a shadow of its former self. That being said, Blackpool is still home to us, so we tried to create a movie that showed the positivity and bizarre charm of the town, the light in the darkness so to speak. We wanted to give an accurate portrayal of our home town, looking at both the good and bad, and think we managed to achieve that with this short film. We had Bobby’s Grandfather narrate the movie, to give the feature a voice of the ‘better days’ of the town - having the voice of yesterday describing today’s Blackpool gives the film an extra layer of nostalgia for the town remembered so fondly by older generations.”

The performance will be filmed with three cameras and relayed live to Prog's Facebook page tomorrow at 1pm. All you need to do, to catch one of the finest young British bands we've heard in a while, is check out our Facebook page and enjoy.