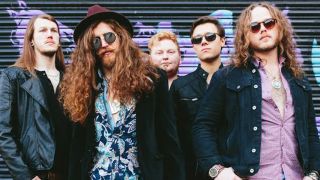 The song appears on the Norfolk-based band’s new album Truth Be Told, which launched in December via Bad Touch Records.

The group feature in the latest edition of Classic Rock magazine, which is out now, where they speak about their influences and what makes them tick.

Vocalist Stevie Westwood says: “We never strived to be really different, as you can tell from the music. People assume that if something is different it’s automatically good. But I think something can be different and utter crap.

“I’d put us down as feelgood rock. What’s the point of going to a gig just to be miserable? We’re not Adele. We don’t want a room full of crying women. I’ve actually written a song for Adele. It’s called My Boyfriend’s Left Me But I’m Not Going To Go On About It.”

Bad Touch will embark on a co-headline tour of the UK with Broken Witt Rebels throughout March and April. They’ll also appear at Joanne Shaw Taylor’s Summertime Blues Festival at Warrington Parr Hall on July 15.