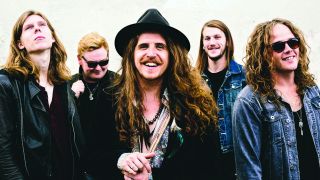 The paisley shirt. The cowboy hat. The backwoods moustache. The bluesy holler. It’s easy to mistake Stevie Westwood for a lost Allman Brother, until the Bad Touch frontman reveals his roots as being from the British county that gave us Colman’s Mustard and Alan Partridge.

“We’re from Norfolk – we’re not gonna lie about it. But it’s hard. I’d love to write a song about being from here, but the place names are just so unattractive. Y’know, Scarning. Aldborough. We can’t write, like, Sweet Home Alanorfolk…”

Perhaps not, but with second album Truth Be Told, Bad Touch have announced themselves as masters of the grand tradition, with Black Crowes-esque boogie-rockers like My Mother Told Me representing the best kind of throwback.

“We never strived to be really different,” explains Westwood, “as you can tell from the music. People assume that if something is different it’s automatically good. But I think something can be different and utter crap.

“I’d put us down as feelgood rock,” the singer decides. “What’s the point of going to a gig just to be miserable? We’re not Adele. We don’t want a room full of crying women. I’ve actually written a song for Adele. It’s called My Boyfriend’s Left Me But I’m Not Going To Go On About It.”

It’s easy to see why founding guitarists Rob Glendinning and Daniel Seekings snapped up charismatic mouthpiece Westwood after he auditioned in 2009 with All Right Now and Jumpin’ Jack Flash. The line-up agreed on their core influences, but initially struggled to get their chemistry down on tape. “We recorded our first EP at [The Darkness guitarist] Dan Hawkins’ studio,” the singer says with a sigh, “and it was absolutely awful.”

Tours with The Quireboys and The Answer tightened them up, and earlier this year, at Mwnci Studios in Wales, the band punched out Truth Be Told in three weeks. “Our first album Half Way Home is dear to me,” says Westwood, “but this is a more mature version. With this band the songs just fall out. Let The Sun Shine is about not letting your worries get you down. Outlaw was written when Seeks watched too many Clint Eastwood movies. I told him: ‘Mate, I don’t feel comfortable singing about bloody cowboys.’ But he said: ‘Paul Rodgers did it all the time.’ The Mountain is saying how Mother Nature will bite us back if we don’t respect her more.”

With songs this good in their locker, 2017 will hopefully be the year Bad Touch go full-time. Westwood is still a barman. “But I don’t want a real job,” he says. “People ask me: ‘When are you gonna give all this up and actually earn some money?’ I say to them: ‘I’ve had a roomful of people – and it might just be two hundred people – singing our songs back in our faces, and there’s no amount of money in the world that could ever buy that.’”

FOR FANS OF: The Black Crowes

“At the start we looked at the stuff we liked – Bad Company, Led Zeppelin, Black Crowes, Rolling Stones – and said let’s merge all these together and put our own flavour on it. In particular, By Your Side by The Black Crowes. There’s not a bad song on it. It drives right through you. It just pulsates.”