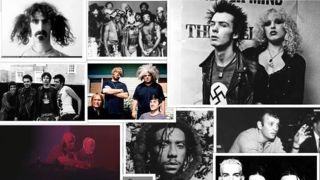 Films about Bad Brains, Frank Zappa, the Melvins, Placebo and Sid Vicious are set to be screened at this year’s Doc’n Roll Film Festival in London.

Also being shown in a film called BANG! – The Bert Berns Story. It offers a look at the life of the producer Bert Berns and features appearances from Keith Richards, Paul McCartney and Van Morrison.

This festival features Q&As with filmmakers as well as a string of world premieres, European premieres and UK premieres.

Eight of the films premiered at this year’s Doc‘n Roll Film Festival have been shortlisted in a competition for the Best Music Doc 2016 prize, judged by a panel made up by Faye Milton (Savages) Simon Taffe (End Of The Road Festival), Liz Kershaw (BBC 6music), Steve Mason and filmmaker Dean Chalkley.

Colm Forde, Doc’n Roll’s Programmer, says: “Three years ago we set out on a passionate DIY mission to discover, support and champion under-the-radar independent music documentaries and present them to very keen, but largely ignored audiences.

“Considering the breadth and depth of musical heritage here, a UK film festival dedicated to this genre, was long overdue. So, I’m delighted to have secured such a rich and varied programme of premiere indie films from across the globe, for this, our third annual London edition.”

The festival kicks off with Gregory Porter Don’t Forget Your Music at BFI Southbank, featuring a Q&A with Porter himself and director Alfred George Bailey.

A trailer for the festival can be viewed below.

Tickets go on sale from October 3 (Monday) via the Doc’n Roll website, where the full running order and other information is also available.

5 metal-as-fuck 2016 films you should know about