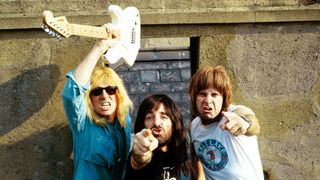 “Show me a boy who never wanted to be a rock star, and I’ll show you a liar.” So ran the tag-line of the 1974 film Stardust, one of the most celebrated rock ‘n’ roll fictions ever released. Time and again the big screen has embraced tales of talent, ambition, hunger, fame, disillusionment and, inevitably, musical differences. Grab the popcorn and let Classic Rock guide you through the best of the bunch.

A hugely influential film - not for the hokey plot (a mobster trying to make his moll a star), but the thrilling musical cameos by Little Richard, Eddie Cochran and Gene Vincent.

A cautionary tale about the perils and pitfalls of stardom, with Elvis Presley as the ex-con thrown into a pool of music biz sharks more concerned with the bottom line than art.

Set in the “near future ‘70s”, Paul Jones is messianic but latterly reluctant pop star Steven Shorter, ruthlessly exploited by both church and state to manipulate the masses.

Groovy chick three-piece The Carrie Nations get mixed up in ‘60s showbiz decadence. Film critic Roger Ebert described it as “a camp sexploitation horror musical”, and who are we to argue?

Phantom Of The Opera set in a rock venue, with a ‘50s nostalgia act, a preening glam rocker, a willowy Laurel Canyon songbird, and a mad mogul intent on music biz domination.

David Essex finds ‘60s beat group superstardom, only to see his dreams fall apart in a whirlwind of backstabbing, recriminations, jealousy and greed. Oh, and drugs play a part as well.

The seedier side of the industry is put under the microscope, as Slade swap glam for grit in a dramatic film that’s closer to Ken Loach than Top Of The Pops.

The story of Dirk, Stig, Nasty and Barry, aka the Prefab Four, is told in rich detail by documentary maker Eric Idle. What made them such huge stars? We think it was the trousers…

Post-punk rage at the dawn of Thatcherism, with Hazel O’Connor as the head girl of dystopian bleakness sticking it to The Man. “Will You?” was a pretty ballad, though…

Tap into America, as the veteran British rockers attempt one last throw of the dice. Pods, puppets and paramours conspire to hamstring their route out of the “Where Are They Now?” file.

Right-wing buttoned-down folk singer enters a senatorial race. Promotes conservatism and Christian values with an acoustic guitar, a soapbox, and a savvy understanding of mass media.

Twentysomethings in Seattle fall in and out of love to a radio-friendly grunge soundtrack. Matt Dillon fronts the not-that-good Citizen Dick, and there are cameos from members of Pearl Jam, Alice In Chains and Soundgarden.

Struggling metal band The Lone Rangers hatch a plot to get their demo played on the radio by taking the DJ and other station staff hostage. What could possibly go wrong?

More the story of a song than a band, as The Wonders take the titular toe-tapper to the top of the charts. Writer-director Tom Hanks even had a hand in penning the ditty.

Investigative journalist on the trail of a reclusive gay rock star, each interview triggering another vignette in the controversial story of the enigmatic Brian Slade. Bowie and Iggy references abound.

Singles writer-director Cameron Crowe draws on his own past, as a wet-behind-the-ears teenage wannabe writer lands a magazine commission to trail longhair rockers Stillwater (and their groupies) on tour.

Outcast transgender rock star (“a slip of a girlyboy”) soundtracks the fall of the Berlin Wall, with songs owing more than a slight debt to the ‘70s androgyny of Bowie and Reed.

Tribute band singer Mark Wahlberg gets the call to replace his idol in the real thing. Inspired by the true story of Tim “Ripper” Owens, who took over from Rob Halford in Judas Priest.

The 21 best rockumentaries to stream on Netflix and Prime