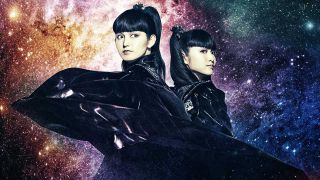 It’s the latest track taken from Su-metal and Moametal’s upcoming studio album Metal Galaxy, which is set for release on October 11. They previously released PA PA YA!! and Elevator Girl from the follow-up to 2016’s Metal Resistance.

Metal Galaxy will feature a number of guest, including Sabaton’s Joakim Brodén who sings on Oh! MAJINAI, and Arch Enemy’s Alissa White-Gluz who provides vocals on Distortion.

A statement on the record reads: “The new album expresses light and darkness, emotions like duality and ambivalence, and ‘new metal’ created by various chemical reactions as other entities evolved and expanded in this album.

Babymetal are the cover stars off the latest issue of Metal Hammer magazine, which is on sale now.

In an interview with the Japanese sensations, Su-metal reveals that former member Yuimetal is still very much part of the Babymetal family.

Babymetal are currently on tour across the US and will return to Japan in November for four arena shows, where they’ll be joined by special guests Bring Me The Horizon.