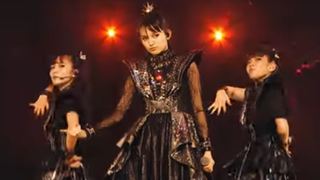 Babymetal have released an official video for their brand new single, PA PA YA!!.

The video, filmed during their two The Sun Also Rises shows at the Yokohama Arena in Japan in May, features singer Riho Sayashio of Japanese pop group Morning Musume, as well as guest rapper F.Hero.

Riho also joined Babymetal for their set at this weekend’s Glastonbury festival. It is unclear whether she is a permanent replacement for Yuimetal, who left in October 2018.

The Kawaii metal band announced their brand new album, Metal Galaxy, will be released in October 2019. It is available to pre-order now.

“The album’s main theme is that Babymetal are on an odyssey to the Metal Galaxy and a different variety of songs are packed within the album,” said the band in a statement. “Welcome to the world of Babymetal!!

Babymetal play a headline show at London’s O2 Academy Brixton on July 2, where they’ll be joined by special guests Amaranthe and Sleep Token.

They then play their first US arena show at The Forum in Los Angeles on October 11 as part of a full US tour.