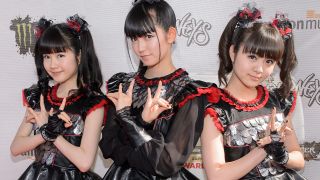 Su-metal says Yuimetal is still very much part of the Babymetal family – despite her leaving the Japanese sensations last year.

Yuimetal, aka Yui Mizuno, officially quit in October 2018, saying in a statement that she wanted “to advance towards my dreams” as a solo artist.

But in the the new issue of Metal Hammer magazine, which is on sale today, Su-metal says her and Moametal hold no animosity towards their former bandmate.

Su-metal exclusively tells the magazine: “We’ve been together for a long time – Yuimetal is like a family member to this group. Although she has left, we’ll continue to support her and hope that she can pursue what she’d like to do in the future.”

In the aftermath of the split, Babymetal manager Kobametal admits he was concerned about how the duo would react to losing their friend.

He says: “Obviously I was worried about them, but at the same time I respect each member – and both of them have become adults, and each of them are continuing Babymetal because they want to. I definitely appreciate that. There’s a sort of trust between this group and I trust that they want to do it.”

Kobametal also reflects on the Babymetal auditioning sessions which took place almost 10 years ago – and says he knew the trio would be the perfect combination.

He says: “When I first heard Su-metal sing – there’s not that many singers that sing the way she does – it was very direct to me.

“Metal bands don’t usually have any dance aspect, so I thought it would be interesting to add that to the new future of metal, hence I selected Yuimetal and Moametal to be the twin factor in the choreography.”

Since then, and with their third album Metal Galaxy on the horizon, Kobametal says the duo have become stronger, both mentally and physically, as a result of their past experiences together.

He adds: “I also feel that the way the girls view Babymetal has really resonated within them and they’re now leading the way, discussing the future of Babymetal and how they want to envision and go through these next, coming tours.”

The full interview can be found in the brand new issue of Metal Hammer, which features Babymetal on the cover.

Metal Galaxy will be released on October 11 and will include a number of guest artists, including Sabaton's Joakim Brodén and Arch Enemy's Alissa White-Gluz.

Babymetal are currently on tour across the US and will return to Japan in November for four arena shows, where they’ll be joined by special guests Bring Me The Horizon.