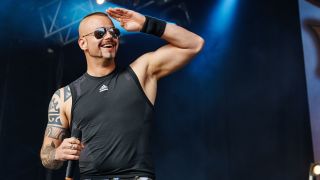 “I’ve been trying to figure out for a long time what makes a great album,” says Sabaton frontman Joakim Brodén, “But, like a really good book, music can make you visualise a world that you can’t see. And that’s a really powerful thing and can open up those senses.”

With that in mind, we challenged the Sabaton vocalist to pick the 10 albums opened his ears and eyes and set him on the path to a life in metal. Here’s what he chose. The Slade album was something of a curveball, mind…

“This is what made me a metalhead. I saw the music video for We’re Not Gonna Take It when I was five or six years old. My mother heard me in the kitchen while it was on and she said she thought I was having a fit. I was freaking out… I don’t actually remember that. But If you were to ask me what I love the most about Twisted Sister, it’s Dee Snider. People don’t talk about him like they do Bruce Dickinson or Freddie Mercury, but he’s the best.”

“I never know which one is better, Rising or Long Live Rock And Roll. But today I’m going for Rising. The combination of Dio and Blackmore; what they can do together is amazing. It’s the birth of modern metal for me actually. The type of heavy metal Sabaton play is down to this band and this album.”

“Heaven And Hell. Does this need any explanation? I think it’s the heaviness, maybe not by today’s standard of production, but give those songs to a band like Rammstein and it would be the heaviest thing that Rammstein have ever played. I think they got even better, too… and I loved the fact that we got great albums from Ozzy and Sabbath as well. It was a great time for music.”

“There’s the songs, of course, but it was more than that. The vocals were different, Wolf Hoffmann’s guitar was different. And you can see that these guys, along with Judas Priest, were shaping what heavy metal is today. They represent the essence of this music.”

“Brilliant songs, brilliant musicianship. Even though it wasn’t with Accept, it was a similar style of music. But I have to say that I think the songs are even better than many of the Accept album. But it’s a good mix of melodic vocals and guitar parts, and then synthesisers and a lot of other things that weren’t traditional in metal.”

“It was my first album. I remember my older cousin brought a lot of music to me and I remember the drumming and the vocals on My Oh My. But such a versatile bands, they could do stuff that was like disco and then they could do this rock’n’ roll music… I wouldn’t call them heavy metal but they were heavy for the time. They’re one of the bands that had a bigger impact on the musicians than they did the fans, who just remember that Christmas song! But they have many great songs.”

“This album defines modern heavy metal as we know it today. But it also puts a period to the era. Like, ‘There you go! That’s how you do it! Follow that!’ and so they kind of killed this music stone dead because no one ever could or has been able to follow it!”

“People think of Yngwie J. Malmsteen as a has-been now, but let’s not forget what he brought to metal with this album. He’s incredibly influential. I think you could throw away about 30 per cent of all metal music without his influence. Would there be a DragonForce without the things he did? I’d say no.”

“This album changed my life. I remember hearing it and it was like somebody took a fucking sledgehammer to my face and I was just, like, ‘what the fuck is this!’ and the arrangements are amazing. Such a versatile band. Such a ground breaking band for this type of music. They made everything bigger, harder, more exciting… it was huge for me.”

“The songs. The rebirth of the band. It’s also an album that defines an entire music genre. What else is there to say? It was the pure energy in the music, the guitar playing or the howling vocals, the fact that there was always something going on and they never stood still. They somehow managed to take the energy of punk and put it into heavy metal without losing any of what made metal great.”