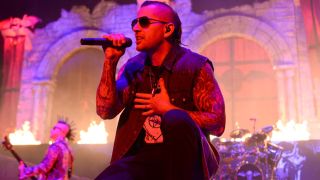 Avenged Sevenfold have released a video for their new track The Stage.

It’s their first material since 2013 album Hail To The King and clocks in at eight minutes 30 seconds.

The release comes after the band’s death bat logo appeared in Toronto, London and Berlin last week – leading to speculation that they were about to reveal fresh material.

Fozzy frontman Chris Jericho apparently let slip details of the new AX7 album. In a now-deleted Instagram post, he indicated the new album is titled Voltaic Oceans and would be released on December 9 – although the band have yet to comment.

Avenged Sevenfold have a number of tour dates scheduled, with their next live show planned for Sacramento’s Discovery park on October 23.

7 Things We Want From The New Avenged Sevenfold Album