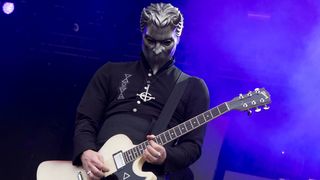 Ghost’s fourth album will launch next year, one of the band’s Nameless Ghoul has revealed.

He says the Swedish outfit will begin working on the follow-up to 2015’s Meliora after they’ve wrapped up their North American tour next month.

He tells 93.3 WMMR: “We’re done in November. After this we’re going to go back home and start pre-producing the new record. And January through February, we’re going to tour Europe.

“Unfortunately, I don’t think we’ll have the time to go to some of these places that we haven’t done so far on this touring cycle, like Australia, Japan and another run to South America.

“Since we wanted to go down there, we’ve said that March and April would be the time for us, but we can’t do it too extensively, because we really need to go to record the album. So springtime is probably the time to record a new album, and for the new album to come out next fall, and then after that we will restart the whole touring cycle.”

Ghost’s Popestar EP debuted at the top of the Billboard chart last month, powered by the launch of new track Square Hammer. The release also includes covers of the Eurythmics, Echo & The Bunnymen, Simian Mobile Disco and Imperiet.

A Nameless Ghoul previously said the covers record was designed to bridge the gap between Meliora and their fourth album.

He said: “If you hear the EP, don’t think, ‘Oh, the next album is gonna sound exactly like this.’ But it’s a good way for us to sneak in elements. You might hear a synth sound like this on the next record, but not as evident.”