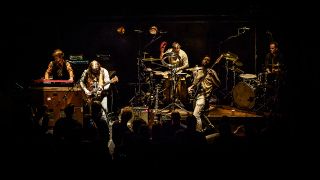 Norwegian proggers Arabs In Aspic have premiered the brand new song I Vow To Thee, My Screen with Prog. The song is taken from the band's upcoming album Madness And Magic, which will be released through Karisma Records on June 12. You can listen to the song in full below.

"The song describes the fascination and fright of our addiction to being entertained," the band tell Prog. "The lyrics are heavily inspired by the British patriotic hymn, I Vow To Thee, My Country, written by Cecil Spring-Rice in 1918."

Hailing from Trondheim in Norway, Arabs in Aspic have been mid-Norway’s flagship of 70s inspired progressive rock for the past 15 years. New album Madness And Magic builds on predecessor Syndenes Magi, showcasing the acoustic side of the band more without losing any of their heaviness.

“The lyrics of Madness And Magic reflect on how easily both children and adults are affected in the digital age, but also how helpless we are when we have to put our lives in the hands of specialists," add the band. "Many ideas came up after a brief meeting with Doctor Death. The message of Madness And Magic is up to the listener to decide. Because you are capable of thinking for yourself, right?”