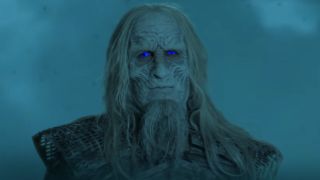 Scott Ian as a White Walker

A video featuring Anthrax mainman Scott Ian being shown how the special effects are created in HBO hit series Game Of Thrones has been released.

In the short filmed by Nerdist, Ian speaks with prosthetic makeup designer Barrie Gower, who leads the guitarist through the process of how they created the series’ iconic White Walkers, Wights and the Night King himself. View it below.

The film also shows Ian transformed into a White Walker – complete with blue eyes and a full set of armour.

In 2014, Anthrax contributed their track Soror Irrumator to The Game Of Thrones Mixtape: Catch The Throne. Ian has also appeared as a zombie in an episode of The Waking Dead.

Anthrax, who won the Inspiration Award at this week’s Metal Hammer Golden Gods, are currently on tour across Europe in support of latest album For All Kings.