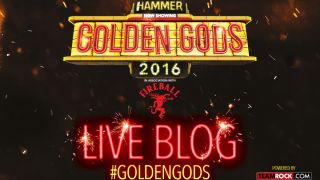 Here we go, folks! The heaviest and loudest awards show on Planet Earth – the Metal Hammer Golden Gods! As Metal Hammer magazine celebrates its 30th birthday this year, we’re taking over the famed Eventim Apollo in Hammersmith to celebrate the best of rock and metal. Throughout the night we’ve got performances from Amon Amarth, Halestorm, and Gojira – plus a very special salute to Lemmy from Phil Campbell, Mikkey Dee and Saxon.

If you want to get involved on social media, use #GoldenGods. And this is what’s happening right now…

Creeper talk to us about winning Best New Band plus touring with letlive and Pierce The Veil.

Schammasch talk to us about their experience of their first ever Golden Gods!

Asking Alexandria chat to us about their new record, the fact they’re all nearly 30, and life after Danny left the band.

Lzzy Hale talks to us about never being nominated as a guitarist, what’s next for the band, and Hellfest 2016.

Joe Duplantier chats to us about Lemmy’s voice inspiring him in a bizarre way, the new album, and how he built a studio in Brooklyn where it was recorded.

Johan Hegg talks to us about trying to take a selfie with Lemmy but his phone dying just before he takes it. Plus playing Download festival and his childhood memories of Lemmy.

Phil Campbell chats about his memories of the Hammersmith Apollo, his thoughts on Lemmy, and on seeing Mikkey Dee for the first time since November.

Mikkey Dee talks about life in Motörhead after Lemmy passed away, his thoughts on the man himself, and the upcoming tribute to Saxon.

Your essential guide to the Golden Gods New Band category

Your essential guide to the Golden Gods Undergound Band category

Your essential guide to the Golden Gods UK Band category

Your essential guide to the Golden Gods Breakthrough category