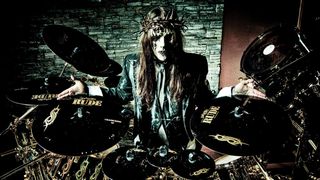 Jordison in his Slipknot era

Joey Jordison has revealed that he was suffering from a serious illness that left him unable to play drums in the months leading up to his departure from Slipknot.

But speaking at last night’s Metal Hammer Golden Gods awards ceremony in London, he shared a message of hope for fellow victims of debilitating disease.

He made his comments while accepting the annual Golden God Award at a gala evening that included a celebration of the life of Lemmy, featuring his surviving Motorhead bandmates and old friends Saxon.

Jordison heaped praise on Slipknot – who dismissed him in 2013 – saying: “I want you all to give them praise. We accomplished a lot and I wish them nothing but luck and the best of praise.”

He went on: “Toward the end of my career in Slipknot I got really, really sick with a horrible disease called transverse myelitis.

“I lost my legs. I couldn’t play any more. It was a form of multiple sclerosis, which I don’t wish on my worst enemy.”

If I can do it, you can do it. To people with multiple sclerosis, transverse myelitis or anything like that, I’m living proof that you can beat that shit.”

Transverse myelitis is a rare disease of the nervous system that can cause paralysis, limited sensory awareness and other symptoms. Around one third of patients experience full recovery while another third experience no recovery at all.

Jordison’s speech begins around the 17-minute mark in the Metal Hammer video. He recently returned to action with two new bands. Vimic, featuring members of previous outfit Scar The Martyr, release their debut album Open Your Omen later this year. Supergroup Sinsaenum will launch first record Echoes Of The Tortured on July 29.