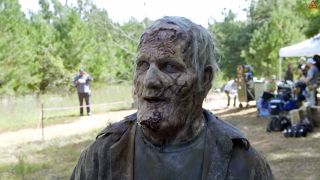 Scott Ian says appearing as a zombie in an upcoming episode of The Walking Dead is a dream come true.

The Anthrax mainman appears as a ‘walker’ on the second half of the current fifth season of the smash hit TV series. He previously appeared as a zombie on a web-exclusive mini episode of the show.

Ian has been a fan of the series from day one, and was an avid reader of the original comic books on which the TV programme is based.

In the latest episode of his Bloodworks series, Ian is filmed in make-up and on the set of the show.

He says: “I’m a massive fan of the show. I just felt like, from the start, ‘God damn it would be the coolest fucking thing if I could get to be a walker.’

“Just to see Andrew Lincoln standing there, it’s surreal to watch him kill walkers…and I’m gonna be one of them. I’m just so fucking excited to be part of it.”

One of the special effects experts on The Walking Dead, Jeremy Aiello, says they were keen to make sure Ian was still recognisablee to fans underneath all the make-up.

Aiello says: “Since he’s a high-profile guy we probably wanna not completely cover up who he is. We might bring his bone stricture down a little to make him more gaunt.”

A self-confessed geek, Ian is also a huge fan of Game Of Thrones and previously said he’d love to record parts of a future Anthrax album in the show’s famous throne room.