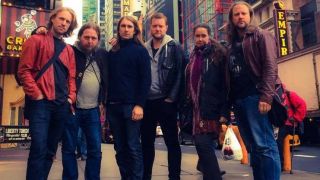 Anglagard are set to headline Gettysburg’s Rites Of Spring festival in Pennsylvania next May.

The Swedish outfit, who have been working on new material, will conclude the weekend-long music event on Sunday, May 7.

Rosfest say: “Anglagard was one of the driving forces behind the revival of progressive rock in the early 1990s, and it’s a pleasure for us to welcome them back to the USA for Rosfest 2017.

“We’re as eagerly looking forward to seeing them live as everyone else, and expect to see a packed house when we have the honor of watching them conclude the 2017 edition of Rosfest.”

Bassist Johann Brand previously said of the long-awaited follow-up to 2012’s Viljans Oga: “Everyone in Anglagard is writing music now – and very interesting music. We have a lot of ideas.

“I think it’s going to be a very interesting album with a lot of energy. Maybe we will do a triple album.

“Every member of the band gets one side of the album, so I get my own side for my own song and all the other members can contribute and add their feelings and special sounds. Like a concept album.”

Anglagard will also appear at next February’s Cruise To The Edge festival alongside Kansas, Steve Hackett, John Wetton, Haken and Spock’s Beard.