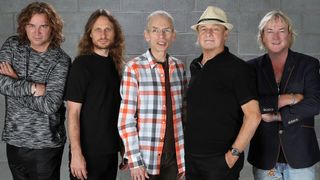 Yes have confirmed the full lineup for their next Cruise To The Edge festival, which sets sail from Tampa, Florida, to the Caribbean island of Cozumel in February.

For the first time, guests will have the chance to jam with their heroes and have big-name artists perform their songs.

Organisers say: “Beyond the once-in-a-lifetime intimate music experiences with iconic artists, guests will get to partake in a wide array of activities – photo experiences, Q&A sessions, late-night surprise performances and more.

“Brilliance Of The Seas combines acres of glass enclosing a nine-story central atrium, elevators facing the sea, and floor-to-ceiling windows throughout. Passengers can enjoy the tranquil solarium pool, recharge at the spa, or reach new heights on the rock-climbing wall. When the sun goes down, the night heats up with epic prog performances on stages throughout the vessel. Combined with some of the best food and service afloat, this will be one of the greatest prog music extravaganzas ever produced.”

Cruise To The Edge 2017 takes place from February 11-17. Tickets are now on sale via the event website.

The Prog Interview: Steve Howe on Chris Squire and The Future Of Yes