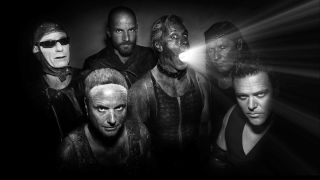 Rammstein keyboardist Christian ‘Flake’ Lorenz says the band are working on new music – but they’re not certain how close they are to recording an album.

They’ve been opening their recent shows with a fresh track entitled Ramm 4, which he describes as a signal of intention over the songs that will follow it.

Lorenz tells Kaaos TV: “We wanted to show the world that we’re still together and that we’re playing and making new music.

“We’ve started to compile ideas for songs and develop them as a band. It’s difficult to say how far along we are, because a lot of the time everything seems to be going well – and then there are days and we just want to start the process all over again.

“That’s why there’s no objective view about how far in we are.”

In his autobiography Der Tastenicker (“The Keyboard Fucker”) Lorenz admits that he doesn’t believe he’s a particularly talented player.

He reflects: “I can easily play Rammstein songs, even if I’d just woken up from my bed and had to play immediately. They’re not so demanding. It’s more about the idea and sound.

“If I practise, I play classical piano songs, and that gives me a lot of joy. That doesn’t benefit me much with Rammstein, though. I don’t really have to improve my playing skills in Rammstein.”

Lorenz says the band’s success has left him without any further career ambitions, explaining: “I’ve achieved so much more than I thought was possible.

“When we were playing in front of 100 people, I thought I was something really big – I never believed I’d play in front of so many people as we do now.

“All my dreams have come true so many times over. That’s why I don’t have any other wishes.”

The A-Z of Rammstein