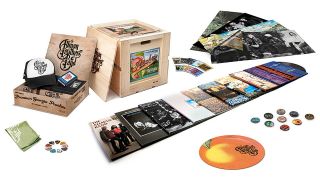 The collection, which contains their output from 1969 to 1979, includes an expanded double-disc edition of their self-titled debut, and a triple-volume version of Live At Ludlow Garage 1970, on vinyl for the first time.

They’re to be made available individually with replicated original artwork, and in a limited-edition crate that comes with bonus content including an amplifier-shaped USB stick, posters, magnets, guitar picks, playing cards and more.

The Allman Brothers Band box set is available to US customers only. All versions are released on July 22.

The event takes place aboard the Norwegian Jade from February 6-10 next year, sailing from Tampa, Florida to Costa Maya, Mexico.

Allman is joined by Bonamassa, Beth Hart, Joanne Shaw Taylor, Anders Osborne and many others. Find out more. The Allmans are cover artists of the latest edition of The Blues, on sale now.

The Allman Brothers Band: The triumph and the tragedy behind At Fillmore East