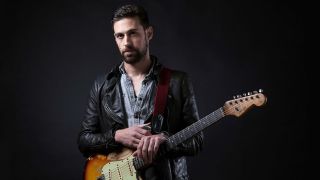 Dan Patlansky learned a valuable lesson about headspace from Joe Satriani as they toured Europe together.

The South African bluesman supported Satch at 26 shows last year, and he’s recalled how impressed he was at the constant quality of the headliner’s performance.

Patlansky tells Purple Revolver: “It was like going to the university of guitar just being with a legend like him. I don’t think you can call yourself a guitarist and ignore the contribution that Joe Satriani has made. It’s impossible.

“I have never seen somebody perform on such a consistently brilliant level. That’s all about the headspace he creates for himself – his playing becomes this effortless thing, so that each show is bang on the money.

“Some nights it can feel like you’re walking through thick soup getting it right, because you overthink a note or a chord or whatever.

“Joe doesn’t, because of this headspace. He knows how to prepare himself properly.”

He adds that Satriani was also good company. “Every night he’d invite us into his room to warm up with him. He doesn’t need to do that, but he did.

“It became a life lesson – it doesn’t matter how big you become, you should still help others along the way.”