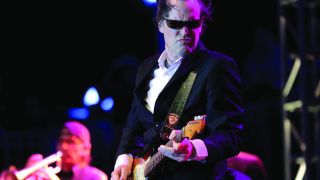 JOE BONAMASSA TESTED his sea legs in February on a blues cruise in aid of his Keeping The Blues Alive foundation, which raises money to provide instruments and support to students studying music in US schools. The Keeping The Blues Alive At Sea II event set sail from Miami on February 15, making its way to the island of Cozumel in Mexico and back, for a week of onboard blues shows among like-minded fans.

Acts including Beth Hart, Shemekia Copeland, Vintage Trouble, Robert Randolph & The Family Band, Blues Traveler, The James Hunter Six, Eric Bibb, Selwyn Birchwood and Simo boarded the Norwegian Pearl, with Jarekus Singleton greeting holidaymakers from the start with a slick set in the atrium. Over the course of the voyage, Bonamassa braved high winds and choppy seas to play three sets on the pool deck – one with his full band, one with Beth Hart and one as a trio – while Shemekia Copeland put on blistering and funny shows indoors. Vintage Trouble continued to cement their reputation as one of the best live bands on the scene, while we got a glimpse of the future with electrifying sets from Canadian blues-rock duo Black Pistol Fire.

This is the second year the cruise has taken place, although Bonamassa admitted when we spoke to him in his private cabin overlooking the main stage that it almost never happened. “I did the Legendary Rhythm And Blues Cruise in 2006 and I didn’t have a great time,” he said. “I didn’t enjoy being out on the water. I felt cooped up and the seas were rough, and everything that could have gone wrong for me, did. And for a decade they kept asking us to do it and we said no: ‘No, this blues boy don’t float.’ But then came the opportunity to make money for the charity, and I saw last year how much fun everybody had, it was like: ‘You know what? You gotta do it.’ And it’s been great. We’re 12 hours from port and I haven’t hurled yet!”

Tickets began at $875 (£622) each, with balcony cabins starting at $1,600 (£1,138), and were sold to help raise funds for Keeping The Blues Alive, founded by Bonamassa and his manager Roy Weisman. This trip raised $52,000 (£36,555). The organisation funds scholarships and programmes for students with an interest in music, one of the first subjects to suffer cuts in US schools. It has reached 33,000 students, and donated over $106,000 (£75,457) worth of musical equipment, supplying everything from percussion instruments and sheet music to guitars and further education opportunities.

“The foundation, Keeping The Blues Alive, started about five years ago, and it’s just myself and Roy,” the guitarist explained. “What we’re doing is raising money for kids playing music in schools. So this [cruise] was a good opportunity. We have a very skeleton crew running the foundation, they do a great job for as little as they have to work with. And we put a lot of our own money into this thing. It just feels good, it’s a good cause. If a kid gets a guitar or gets some guitar strings or some sheet music, or whatever they need, I don’t see the downside to that. And if it takes us careening through the Gulf Of Mexico for four days to achieve that then I’m happy.”

During his final set on board, Bonamassa announced that the cruise will return for another outing in 2017, and while it’s too early to know who else will be on the bill, one idea the headliner is thinking of at the moment is a revival of the Muddy Wolf shows, in which he paid tribute to Muddy Waters and Howlin’ Wolf at Colorado’s Red Rocks Amphitheatre in August 2014. Next year’s event will go from Tampa, Florida to Costa Maya, Mexico.

“This cruise has been a lot of fun for me, it’s been a lot of work,” Bonamassa said. “The cruise has been such a success. As I’ve been walking the halls, people have thanked me for doing it. I didn’t really do anything except show up and try to play the guitar in tune. The inspiration to do it again [this time] was all about the smiling faces that I get to see. And the inspiration to do it for a third time was again all the smiling faces, and people really love discovering acts like Josh Smith and James Hunter – everybody should be familiar with James Hunter, he’s great!”