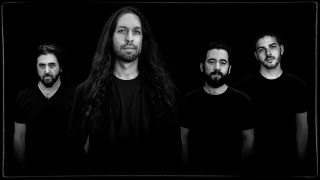 Los Angeles-based prog metallers Alizarin have streamed their new single Velvet Margin. It's the second single taken from the band's upcoming second album The Last Semblence, which is released later this year. You can listen to Velvet Margin below.

"This second single, Velvet Margin, is a drastic contrast from most of the other tracks on the new record," explains vocalist and guitarist Josh Kay. "Driven by haunting vocal lines, expressive counter harmonies, and layered acoustic instrumentation, the song arguably contains some of the most melodic and memorable passages on the album. In many ways it is some of the most uncharted territories for Alizarin, letting the vocals drive a lot of the music and focusing even less on flashy or over the top instrumentation. The closest thing to a “ballad” we have, although we tend to steer clear of that term."

"The album is a work of cinematic progressive metal, centred around brooding melodies and wrapped in epic compositions," adds Kay. "There are influences from many styles of music, many beyond metal as well. The music is very melody-driven, with technical aspects in moderation woven into the larger song structures. The chords, melodies, and arrangements are meant to be unpredictable, unconventional and compelling, while remaining extremely listenable and catchy."