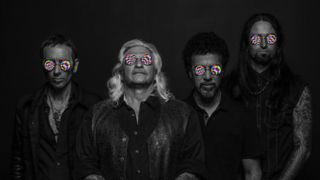 The Apocalypse Blues Revue have made their track Devil Plays A Strat available to stream exclusively with TeamRock.

The song features on the band’s self-titled debut album which is set for release on August 26 via Provouge/Mascot label Group.

The lineup is centred around Godsmack men Shannon Larkin and Tony Rombola, who are joined in the lineup by vocalist Ray ‘Rafer John’ Cerbone and bassist Brian Carpenter.

Speaking about the band, Larkin says: “As far as blues goes, The Apocalypse Blues Revue is a little heavier, a little darker, and has some punk rock attitude in the lyrics.

“We wanted to make something deep that will provoke thought – it had to be evil though, we’re not trying to make it happy. It’s called blues for a reason.

“It was also an opportunity to show the world what a phenomenal guitar player Tony is. I didn’t even know he was into blues or could play the way he does. My reaction was immediate. We had to officially start a blues band.”

As for their first blues-influenced album, Larkin adds: “I want people to walk away with our songs stuck in their heads. The music speaks for itself on this record.”

The Apocalypse Blues Revue previously released a stream of The Tower with TeamRock.