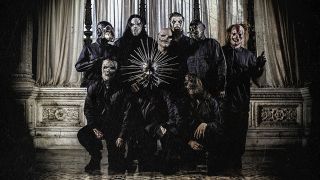 The 18-legged wrecking machine known as Slipknot are working on their sixth full-length album. The follow-up to 2014’s .5: The Gray Chapter, released in the aftermath of Paul Gray’s death and Joey Jordison’s departure, is undoubtedly going to be a heavy, vitriolic and emotional record from start to finish. Various members of the Slipknot family have started talking about the new album and sharing glimpses behind the curtain, so it’s safe to assume the wheels are in motion for album six.

Here is everything we know so far about the next Slipknot album.

When will the new Slipknot album be released?

Slipknot's new album will be released on August 9 2019. Slipknot have announced both European and North American tours for next summer, including the Knotfest Roadshow, in support of the new album.

Earlier this year, Slipknot frontman Corey Taylor revealed that the new Slipknot album would be released at some point in 2019.

“I know that we're gonna try and put an album out next year – however, that is all speculation,” he told Billboard. “The best way to make God laugh is to announce your plans out loud. So I'm just going with the flow. The plan right now is next year but that is a huge plan because we still haven’t narrowed anything down, so we will definitely see what happens.”

This was compounded in an interview with Heavy Music Interviews, in which Taylor said he’s going to focus entirely on Slipknot next year and step away from his Stone Sour commitments.

Have Slipknot teased anything about their new album?

So far, all we know for sure is the release date.

Continuing from the silent video of Craig on the band's Twitter, at the end of September the band tweeted a snippet of drummer Jay Weinberg flailing his head around. Since then, all social activity has been awash with their summer tour plans and new single All Out Life, still without any mention of a new album.

Various members of camp Slipknot have been drip-feeding the odd teaser on social media. In April, the official Slipknot Twitter posted a photo of Corey Taylor and Shawn ‘Clown’ Crahan seemingly in a studio together, just with the caption “2019”. It shouldn’t take a detective to work out what’s going on there.

In May, new bassist Alessandro ‘V Man’ Venturella posted a picture of a slightly altered Slipknot logo on his Instagram. Painted on what could be a gear case, the lines through the P and the O aren’t a part of the conventional band logo. Or maybe it's just a stencil?

At the start of September, a video clip Slipknot sampler/keyboardist Craig ‘133’ Jones was posted on the band’s official Twitter account. Zooming in and out with an old VHS-style filter, we have no idea what this means in the long run.

Speaking to Metal Hammer about the new album, frontman Corey Taylor said of their upcoming record: "What if the guys who made Iowa matured? What if the kids who made Iowa grew up? That’s kind of the way we’re looking at it because some of this shit is so heavy – but there’s melody, there’s really cool melancholic melody going on.

“Some of this shit is just so hard and dirty fast. It’s fucking really good. It’s also us at our most ambitious, our most experimental, also us doing what we fucking do best which is basically when everybody thinks they’ve got us figured out, we just smack them in the face with everything we’ve got.”

He goes on to say that the band have written the heaviest song of their career.

On Halloween, Slipknot released the single All Out Life, which harks back to the most aggression, maniacal sound of the first two Slipknot albums, but with production and tones from their later era material. Obviously, it sounds great.

Speaking to Kerrang! back in June, Corey Taylor revealed that the new Slipknot album will be Iowa levels of heavy.

“We have 16 songs written right now and they are fucking dangerous,” he said. “I loved .5: The Gray Chapter, but this album, to me, makes .5 look like nobody’s business.

“This is Iowa levels of heavy. And I have to go out and tour this shit at my age – I can feel those songs in my back!”

In an interview with Loudwire, Corey also said that the lyrics for the new Slipknot album have been inspired by the depression he’s been battling.

“I'm working out some things, personally for myself, which has been great,” he said. “I've been able to grab ahold of some of the depression that I've been fighting and formulate the way that I want to describe it. So some of these lyrics are, to me, some of the best I've ever written. It's probably the most I've shared in years.”

Taylor also compared the lyrics he’s currently working on to those he wrote during the band’s early years.

“I know Clown was, like, just blown away by how open and raw it all felt,” he said. “It felt like the old days. It felt like the beginning when it was just – we were the wound and the fans were the scabs. Trying to get it to heal and we were all trying to heal together.”

Are Slipknot working on their new album?

They sure are! Last month, frontman Corey Taylor said Slipknot currently have 20 demos in the bag and are planning to hit the studio early 2019.

“Right now, we have 20 songs that we’ve demoed. And they’re really good. So it’ll just come down to which ones come out the best and we make the album out of that."

In October last year, Clown told Metal Hammer that Slipknot have eight new songs ready and that he was working on ideas with guitarist Jim Root and drummer Jay Weinberg.

In February, Corey Taylor checked in to say that the new Slipknot material sounded “awesome” and that it’s everything he wanted it to be.

In June, Corey followed up his "Iowa levels of heavy comments" by saying he’s in talks with the Slipknot guys all the time, and everyone is stoked on what the band are about to unleash on the world.

““I am really excited about it, and I talk to the guys in Slipknot all the time. I talk to Clown either every day, or every other day. I’ve been talking to Jim, V-man, Jay, Mick, Craig, Chris and Sid,” he said.

“We’re all really excited about this stuff and it’s coming together really fucking well.”

What is the new Slipknot album artwork?

We have no idea. Two out of the past five albums have had a photo of the band on the cover, so maybe it’s that time again? Or it could be a goat?

What is the new Slipknot album title?

Not a clue. Albums three and five referenced the album number (Vol.3: The Subliminal Verses and .5: The Gray Chapter), so there might be an allusion to the number six. It is one of the numbers of the beast, y’know.

What are the lyrics to All Out Life?

Slipknot's latest single All Out Life has broken their own YouTube record for the amount of views within 24 hours. The song itself is aimed at music fans' limited attention spans and the constant desire to be first and find the next big thing, forgetting about how good music and art was and has been for years and years.

Let's take a look at the lyrics to find out what Corey really has to say.

Drop that shit and put it on a pedestal
Children are afraid of the gods
Raise your hands and show me what’s impossible
That makes us even
Never tell me the odds
What a bore, I’m getting stuck in a metaphor
I don’t want to go to sleep
I need a breakdown quick in negotiations
Get it all together and remember to see

Drive by violence, more of the same
I can see where you’re going and I’m really ashamed
Do you think when you act or just act like you’re thinking?
I got to know now, you better tell me

We are gathered here today to get it right
Repeat after me
I will not celebrate mediocrity
I will not worship empty shells
I will not listen to worthless noises
I will not subject myself to selected predictable choices
My time, my attention
My quality should not be bought and sold
For convenience's sake, ever!

We are not your kind