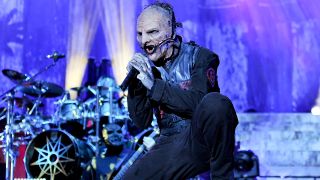 Corey Taylor has spoken exclusively with Metal Hammer as Slipknot continue work on the follow-up to 2014’s .5: The Gray Chapter.

The vocalist reported earlier this week that Slipknot had 20 demos in play and would begin sifting through them to see what tracks make the final cut.

And speaking with Metal Hammer, Taylor says that one of those songs is among the heaviest they’ve ever written.

Asked about the direction of the new album, which is expected to be released at some point in 2019, Taylor says: “The way we’ve been describing it is, ‘What if the guys who made Iowa matured? What if the kids who made Iowa grew up?’

“That’s kind of the way we’re looking at it because some of this shit is so heavy – but there’s melody, there’s really cool melancholic melody going on.

“Some of this shit is just so hard and dirty fast. It’s fucking really good. It’s also us at our most ambitious, our most experimental, also us doing what we fucking do best which is basically when everybody thinks they’ve got us figured out, we just smack them in the face with everything we’ve got.”

Taylor adds: “At a time when most bands are slowing down, I think we’ve written our heaviest song – one of them anyway – on this new album.

“It’s going to be fucking crazy. People are going to shit their pants when they hear it.”

Earlier this week, Taylor also hinted that Slipknot could release the tracks that don’t make it on to the as-yet-untitled album following its launch.

Slipknot have teamed up with the Slaughterhouse Haunted Attraction for a horror-themed event in their home town of Des Moines, Iowa, with this weekend dedicated to a very special VIP experience.

A member of Slipknot will personally guide you through the gruesome Slaughterhouse, while there will also be meet and greet sessions with the band and exclusive merchandise bundles available.