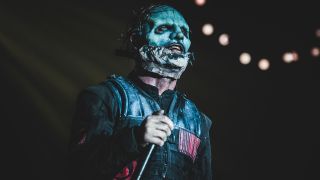 Corey Taylor has checked in to give an update on the progress of Slipknot’s next studio album.

He revealed earlier this month that the lyrics he’s been working on reflect “a heavy couple of years” for him personally. And in a new interview, Taylor has given some indication on the musical direction of the record – and reveals they currently have 16 demos and it's sounding "Iowa levels of heavy."

Taylor tells Kerrang: “I have fantastic news. Some of you know, but I’ll just make it official right now: We are working on a new album.

“It’s only in the demo stages, however we have very serious, tentative plans – and I say that because the best way to make God laugh is to announce your plans out loud – to go into the studio at the beginning of next year and get this fucker going.

“We have 16 songs written right now and they are fucking dangerous. I loved .5: The Gray Chapter, but this album, to me, makes .5 look like nobody’s business.

“This is Iowa levels of heavy. And I have to go out and tour this shit at my age – I can feel those songs in my back!"

He adds: “I am really excited about it, and I talk to the guys in Slipknot all the time. I talk to Clown either every day, or every other day. I’ve been talking to Jim, V-man, Jay, Mick, Craig, Chris and Sid.

“We’re all really excited about this stuff and it’s coming together really fucking well.

“So be prepared for 2019 – which, weirdly, is the 20th anniversary of our first album. Shit’s about to get fucking real again! So take that as you will.”

Earlier today, Code Orange released a new three-track EP which features a guest contribution by Taylor on the track The Hunt.