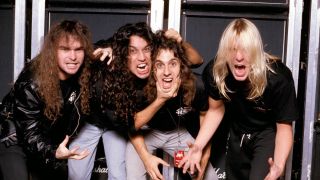 Since its inception in the early 80s, thrash has been a cornerstone of the metal world. But there's way more to it than the Big Four, allow resident thrash superfan Dom Lawson to give you a brief education...

While it is eminently credible to attribute the genesis of thrash to bands that were operating prior to Metallica’s arrival on the metal scene – Motörhead, Venom, Anvil and Accept all have a decent claim to have kick-started the whole thing – there is little doubt that the official starting point for the genre is the band’s debut, Kill ‘Em All. Steeped in NWOBHM thunder and powered by hardcore punk snot ‘n’ bile, Metallica were the ultimate sonic kick up the backside for a flagging scene and songs like this one redefined what it meant to be fast, furious and heavy as fuck. Never mind how far the band have since strayed from their original ideals – this is the essence of thrash.

Perhaps more than any other band from the original thrash explosion, Exodus nailed the sound that we now recognise as classic thrash on their Bonded By Blood debut in 1985. While the Big Four may have had the success and the will to experiment, the Bay Area crew became deservedly legendary by concocting the ultimate thrash formula. Plus, of course, in Paul Baloff they had the ultimate thrash metal talisman – a man so metal he used to shit lumps of aluminium. We imagine. Laudably, Exodus remain standard bearers for the genre. Check out new album Blood In, Blood Out to hear how it’s done in 2014.

Acrimoniously booted out of Metallica for being a massive pain in the arse, Dave Mustaine channelled all his vitriol – plus a ton of talent, lest we forget that he co-wrote much of his former band’s classic early material – into his own band. Megadeth were faster, nastier and more technically proficient than any of their peers and by the time they arrived at second album Peace Sells… But Who’s Buying? in 1986, they were an unstoppable metallic force. Wake Up Dead even breached the UK Top 40 singles chart, which is still a mind-blowing achievement. Later albums refined the band’s formula and took them into more adventurous territory, but Megadeth were always thrash metal’s most audacious practitioners.

What’s the greatest thrash metal album of all time? Many would say it’s Metallica’s Master Of Puppets. But it isn’t. It’s Reign In Blood by Slayer. The dark, Satanic hell-priests of thrash metal never hid their devotion to Venom’s antichristian imagery, but their early albums were routinely mocked by a music press that simply couldn’t comprehend the sheer brutal ugliness of the band’s sound. By the time they made Reign In Blood with producer Rick Rubin, they had mutated into a streamlined and devastating attack squad and, suddenly, no-one was taking the piss anymore. If you need reminding why Jeff Hanneman is regarded as a metal god, listen to this. He wrote it, and it’s perfect.

Anthrax – Caught In A Mosh

While many people insist that Overkill, Testament or Exodus deserve the fourth spot in thrash metal’s Big Four, it would be silly to underestimate the importance of Anthrax to the genre’s evolution. Their intermittent goofiness aside, the New Yorkers brought a fresh and hard-as-nails vibe to thrash, plus a lot of comic book imagery and a knack for killer choruses that justifiably made them chart regulars on both sides of the Atlantic back in the late 80s. Taken from their glorious 1987 album Among The Living, Caught In A Mosh is still one of the most exhilarating five minutes of nuts-out metal you’ll ever hear. RIFFS.

America dominated thrash metal in the 80s, but Germany came pretty close to making a similar impact. Kreator undeniably led the charge with a vicious, raw and uncompromising musical vision that made even Slayer sound a little pedestrian at times, but nods must also be given to Destruction, Sodom, Tankard, Holy Moses and several other bands. German thrash was somehow darker and more unrelenting than its Western Hemisphere counterpart, and its seething intensity was never better expressed than on this title track from Kreator’s immortal second album.

Dark Angel – The Burning Of Sodom

Just as Germany were taking thrash up a few breathless notches, North and South America responded with a new wave of bands that flicked the turbo switch and upped the sonic ante once more. Voivod, Sepultura, Possessed and Nuclear Assault could easily have taken this spot too, but despite never quite achieving the success they deserved, Dark Angel take the honours for being so much more violent and raging than anyone else. Perhaps ever. Their second album Darkness Descends is a stone cold classic – released in the same year as Reign In Blood and Pleasure To Kill but, unbelievably, more insanely aggressive and remorseless than either. It still threatens to take your face off 28 years later.

(Taken from Dreamweaver (Reflections of Our Yesterdays), 1989)

The UK’s thrash scene never quite got the wind in its sails, despite the best efforts of Onslaught, Xentrix, Acid Reign and a whole host of worthy but ultimately doomed also-rans. With hindsight, it was Nottingham’s Sabbat who made the most telling contribution of all, with a sound that had an indubitable influence on a good number of 90s black metal bands and a progressive and inspired musical approach that bravely attempted to give British thrash a distinctive identity. Their second album, Dreamweaver (Reflections Of Our Yesterdays) is a towering conceptual masterpiece, driven by guitarist Andy Sneap’s (yes, that one) deep arsenal of riffs and Martin Walkyier’s endlessly inventive lyrics and scabrous shriek.

Thrash died on its arse in the early 90s, thanks in part to Metallica’s journey into the arena rock stratosphere and also thanks to the arrival of the generally rather tedious grunge scene, which made many formerly admirable thrash bands ditch the speed and aggression in favour of dewy-eyed plodding. Thankfully, the flame never truly died out and The Haunted stoked the coals with consummate skill when they emerged from Gothenburg, Sweden, towards the end of the decade. Neither purposefully retro nor overtly progressive, their self-titled debut was simply a massive punch in the face. And one that thrash – and metal in general – sorely needed.

Thrash metal has enjoyed a huge and enduring renaissance over the last decade or so, with bands like Municipal Waste, Evile and Nekromantheon dusting off their denims and taking the genre back to its original sonic principles with renewed gusto and venom. But if you’re going to listen to one contemporary thrash band, make sure it’s Vektor. Insanely inventive and yet every bit as savage and gruesome as the genre demands, the Arizona quartet are light years ahead of the competition, as this epic highlight from 2011’s Outer Isolation proves beyond doubt. They’re sci-fi freaks too, which just makes it even more exciting. Play it loud, bang your head, thrash ‘til fucking death.

While you’re here, check out our Essential Thrash Playlist.