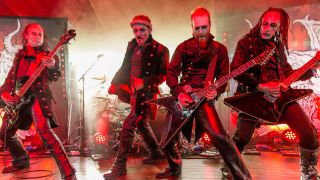 We went to Hyde Park the other week for British Summer Time headlined by Black Sabbath. While there we caught up with Hell guitarist Andy Sneap to talk Truants, Sabbath and Saxon. Originally recorded for the Metal Hammer Radio Show, you can read the interview in its entirety below.

**You were on the Heavy Metal Truants bike ride not too long ago, what did you make of it? **

“It was just something a bit different really, when I saw you guys at Download last year and you’d just completed it, you egged me into it. It was a bit of a challenge but a good way to keep fit and it was a lot of fun – a lot of camaraderie. It’s three days of hard work, but it was actually a lot more fun than the festival I thought.”

What is the best cycling album?

“The Dio tribute album is good, but it’s actually the length of the record, so you don’t have to stop. The Priest compilation and the Dio compilation were pretty good, they took my mind off it.”

You haven’t stopped raising money, you actually donated quite a unique item, a hand assembled stool, made by who?

“It was Dave Mustaine actually, when we were working on the first record I did – United Abominations. When we were in the studio he was having back problems and needed a high stool to sit on, so he went out and hand-assembled it, so yeah you can have that.”

As well as Hell playing in Hyde Park, some are saying this could be the last Black Sabbath show. What do they mean to you?

“I really picked up on them more when Dio was in the band to be honest, because of the age I’m at. I was really into Ozzy with Randy, those first two albums I was more focused on. It was Mob Rules actually that got me into Sabbath, but I think Sabotage before that. Then obviously I went back and discovered them because I would have been about 11 or 12 when Mob Rules came out.

I wasn’t one of these die-hard Ozzy fans, I even like the Gillan album, Born Again, I think it’s a fantastic record. The mix is a bit shocking on it but I think the songs are good. I think the Tony Martin stuff is great as well, so I think there’s always been a stamp of quality on it where Tony Iommi is concerned. Well really, I don’t think any of us would be playing this music now if it wasn’t for Sabbath.”

A lot of people forget about those wilderness years where Dio left, but Tony kept the thing going for a really long time.

“Absolutely, I know it wasn’t considered a high point in their career, but metal was going through a difficult point in the 90s. Think about the Dehumanizer album for instance, because I saw them twice on that tour with Testament supporting. I saw them up at Manchester and Birmingham, and that wasn’t considered a great comeback album then at all. I think if they’d released that when they did the Heaven And Hell record people would have been freaking out about that album. I think a lot of it was the time and where people’s heads were with metal.”

It was a time of transition and some of the best metal bands became uncool.

“Yeah, obviously it was still cool in Germany because it hasn’t changed there for god-knows how long. I think the UK is very image and media driven – you can almost feel the magazines steering it a little bit. I’m not talking about your wonderful publication of course, I’m talking about another publication. It always felt like it was looking for where it should be going, the rock scene has always been influenced a lot by what the magazines were saying. I think the whole sort of scene change came about, I think something needed to happen to freshen it up, but the magazines steered the ship a little bit back then.”

“Disturbing The Priest. Like I said earlier, the Gillan album is a really good album, it’s just the mix that let it down – the rough mixes you can get of that album now sound better. It was just a good record to me, like I said I really like Heaven And Hell, and Mob Rules as well. When I was getting into Sabbath it was those that I really picked up on first and then I went back and discovered the Ozzy stuff.”

How influential would you say the mysticism around Black Sabbath been?

“Well I think that’s all down to image as well really. I think a lot of bands miss the point now, where the whole album cover, I think it’s the lack of the vinyl thing, when we grew up we had vinyl, so you’d have the whole album cover and the look of the band, and you’d get a real sense of what the band was about before you’d even heard the music. I think because we grew up with Sabbath, and we had those album covers on vinyl, and the way the band looked, and there wasn’t the media coverage you’ve got now. There was that distance between you and the band, which I still think is really important. I think it’s important to create a bit of that mystique if you can. You’d only ever get to see the band if they came round on tour, obviously no facebook updates, or video, YouTube, press things going off all the time. There was more distance, and more mystique, and we look back at the old bands a bit more like that I think.”

So what’s next for Hell after you’ve played Hyde Park?

“We’re playing Wacken next month, which will be a good one. We’ve got Leyendas del Rock in Spain, we’ve got Novarock in Belgium as well that we’re doing, so there’s three festivals coming up next month. Then we’ve got the Saxon tour at the end of the year – November/December.”

Quite a momentous tour as well, their 35th anniversary.

“Yeah I think it is, they’re going to be playing all the hits, but they always play all the hits any way. It’s a good back catalogue, I’d forgotten how many good songs Saxon had until I mixed the live record for them. I did live in Manchester and it was just hit, after hit, after hit, and Biff was telling me they’d wrote the whole thing, all three albums within a year and a half. It’s amazing when you think about it, they were literally turning albums out that quick, so it was a bit of a glory period for them back then.”