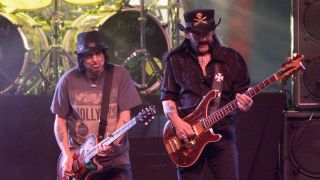 Impervious to just about everything that rock’n’roll – or indeed life itself – has thrown at them over the past 35 years, Motörhead have long been the personification of heavy music’s feral spirit; an immovable barrier between untamed celebration and the looming spectre of the mundane. But while it is has become commonplace for Lemmy Kilmister and his trusty sidemen to be praised for what they represent, the fact that the band have spent most of the 21st century re-establishing themselves as a major creative force in the rock world has been overlooked.

Fortunately, events occasionally conspire to shine a light on the bleeding obvious. And so as Motörhead celebrate their 35th anniversary and their leader’s 65th birthday [on Christmas Eve 2010], they are also unveiling their 20th studio album, The World Is Yours. As ferocious and uncompromising as ever, the new record is simply one of the best they have recorded in a long time, and if there is any justice in the world – Lemmy would probably scoff at the very idea, but bear with us on this one – then Motörhead should enter their 36th year of active service with the wind of success in their sails.

“I try not to hold myself up to those things, because I’ve been disappointed so many times,” Lemmy states, dismissing with his customary snarl the notion that expectations regarding Motörhead are at an all-time high. “I’m just grateful that we are still going, and that we have seemed to attain a level in America that will allow us to tour there on our own [as headliners], you know, as opposed to tagging along with other bands. And of course I’m really pleased that we have made a comeback in England, because for a while there things didn’t too look good. I just want to get to some other places before I have to give it up. I’d like to get to China and Africa and India because we’ve never played any of those places.”

Bolstered by the ongoing, loyal presence of guitarist Phil Campbell [a Motörhead veteran of 26 years] and drummer Mikkey Dee [still the band’s ‘new boy’ with a mere 18 years under his belt], Lemmy has steered his band deftly through the last decade, overseeing an undeniable return to top form that has breathed new life into the Motörhead phenomenon. Ever since 2004’s Inferno album, for recording the band have chosen to work with young American producer Cameron Webb, and it is this partnership that seems to have facilitated this latest artistic purple patch. Kiss Of Death [2006] and Motörizer [2008] were both stuffed to the gills with quintessential Motörhead moments. The new The World Is Yours is, in the best possible way, more of the same. From the lurching aggression of opener Born To Lose [the flip-side, we can only assume, of Live To Win from 1980’s Ace Of Spades album] to the priapic, snot-flecked shuffle of the closing Bye Bye Bitch Bye Bye, it’s an album that crackles with intensity and belief, making the efforts of many much younger bands sound flat and flimsy by comparison. Clearly, Webb’s gift has been to enable Motörhead to be themselves, only more so.

“We keep working with him because he’s excellent, it’s as simple as that,” Lemmy says of Webb. “As producers go he’s top of the scale. He’s worked with a lot of bands that don’t sound anything like us at all, so he’s versatile. He can produce anything, and he’s great with [music production software] ProTools, which saves so much time in the studio. In the past [if there was a mistake] you used to have to re-record the whole track. Now you don’t, of course.”

One great benefit of Motörhead’s recent resurgence has been that, at last, they have – creatively, at least – demonstrably surpassed the achievements of the supposed glory days of the Lemmy/Eddie Clarke/Phil Taylor line-up that recorded seminal albums like Overkill, Bomber and Ace Of Spades. Considering that the usual running gag about the band is that there’s no such thing as a bad Motörhead album because they’re basically all the same, it’s the depth and diversity of the recent material that has really taken the fans and the critics by surprise.

“You’d think all of the riffs have been used now. But that’s not true, they haven’t,” Lemmy smiles. “Having Mikkey in the band is useful. If you write with the drummer, that makes things a lot broader. A riff on its own isn’t much use to most drummers but Mikkey’s so great, he’s got real legs, that he brings a song to life. Those two [Phil and Mikkey] usually put down a riff, though occasionally I’ll provide the riff. Sometimes we’ll play around with it together until it’s ready, but mostly it’s down to those two. Then I come in and mess it up for them. They get all outraged and say: ‘It’s our song. How could you?!’ The problem is that they don’t think like a vocalist, you see.”

“The chemistry between us has never been better,“adds Mikkey Dee. “I can tell you that we used to be very hot-headed as a band, there were a lot of fights and shit. Each of us has strong opinions. But that’s kinda faded away because we know one another so well. We know who’s going to take care of what, and the whole element of competition is gone. Everyone knows their place, as well as what will push somebody’s buttons. Sure, there’s the odd fight here and there but it’s not even close to the way things were 10 or 15 years ago.”

Recorded primarily at Foo Fighters frontman Dave Grohl’s Studio 606 in the northern suburbs of Los Angeles, The World Is Yours sounds like a million dollars, despite clearly having cost a fraction of that to record. And despite the friendliness of their surroundings and the fact that this was the fourth time Motörhead have recorded with producer Cameron Webb, not everything ran smoothly and went according to plan during the sessions for the new record. For guitarist Phil Campbell in particular, the album’s birth was an emotionally draining process, due to the death of his father who had fallen ill as the new songs were being pieced together.

“I was in LA as the songs were being written and then my dad got ill, so I came home,” Campbell recalls. “All my guitar parts were done in Cardiff, the rest being done in LA. I’d go and see my dad in the morning, and found I was able to concentrate on the guitar playing afterwards. Not having Lem there to ask: ‘What would you like me to do with this part?’. I just had to use my intuition and my knowledge of the way the band works, but Lemmy was really happy with it all.”

“We always do our parts separately, see,” adds Lemmy. “We put the drums down and then we do the guitars, then the bass and finally the vocals. Sometimes when we record, Phil goes in during the afternoon and I’m there in the evening. So it was the same set of circumstances as usual, only with more distance thrown in. We sent things to one another via the internet, which really helped.”

Somehow the notion that Motörhead are exchanging compressed music files via the internet doesn’t quite fit with their status as guardians of the ancient spirit of rock’n’roll, but for all his refusal to play the usual music industry games – or even to own a computer, as recent Lemmythology would have it – Lemmy Kilmister is not daft enough to think that the oncoming tide of technological innovation is something that he or his band should ignore. By linking up with Classic Rock for our recent Motörhead special – whereby The World Is Yours was released early, packaged with our Motörhead-dedicated magazine in a custom- made ‘fan pack’ – the band have tacitly admitted that they need to move with the times. Even so, Lemmy remains unconvinced that surrendering to the profit-destroying, online free-for-all is the right way for anyone to be doing things.

“The thing that people have to understand about downloading your favourite band’s music for free is that if you keep on doing it, in six months your favourite band will have to stop playing,” he sighs. “They won’t be able to afford to keep going. That, and fees for touring, are the only ways we get paid these days. And from the touring profits we also have to pay hire of the hall and PA, and a support band. So if you want to kill your favourite band, go ahead and illegally download their music.”

Of course, one suspects that Lemmy is not including his own band in this cautionary foretelling. Having survived for this long and with both their integrity and artistic faculties intact, Motörhead seem to be living proof that rock ’n’ roll will endure, whether people are helping themselves to illicit digital music files or not.

“Rock’n’roll will always have a future,” Lemmy offers. “People will always want to hear it and musicians will want to play it. Even some scabby 16-year-old from a secondary modern somewhere, he’ll want to get fucked just as much as everybody else. There’s no instrument in the world that’s better to pose with than an electric guitar. You cannot pose with a tuba. Neither can you pose with a mandolin, I’m sorry, it just isn’t that masculine!”

As everyone will soon become aware of, when the recently filmed Lemmy: 49% Motherfucker 51% Son Of A Bitch rockumentary hits screens both big and small, one of rock’s most dogged survivors has still got plenty of fight and fury in the tank, not to mention the support and admiration of generations of fellow musicians urging him to continue to defy the odds by keeping the Motör’ running and taking the band ever further into the future. Certainly The World Is Yours is an indication that Motörhead still have plenty left to offer. And if Lemmy’s bandmates are to be believed, a few more albums and even a few more anniversaries seem as inevitable as the howling ringing in the ears that follows being at a Motörhead gig.

“Lemmy can still kick up the dust like the rest of us,” laughs Phil Campbell. “He’ll never change. He’s not afraid to say what he wants to say and fucking annoy people if that’s what happens. Half of the time, he’s been there and done it all. There’s not much stuff he hasn’t experienced, so there’s not much left to excite him. But he hasn’t lost his edge.”

“In the year 2000 I’d have been a lot more worried about Lemmy’s future than I am today,” Mikkey Dee says thoughtfully. “As quite a few people will know, Lem has been quite ill [he has been diagnosed as diabetic], but he’s doing fantastic now. Over the last decade this band has only gotten stronger, and these last five years have been incredible. Lemmy has become stronger, too. The guy goes up there and rocks harder than he has ever done.”